Above the present days: Lukomir (Bosnia) | The Family Without Borders
Bosnia
August 28, 2013
Likes

Above the present days 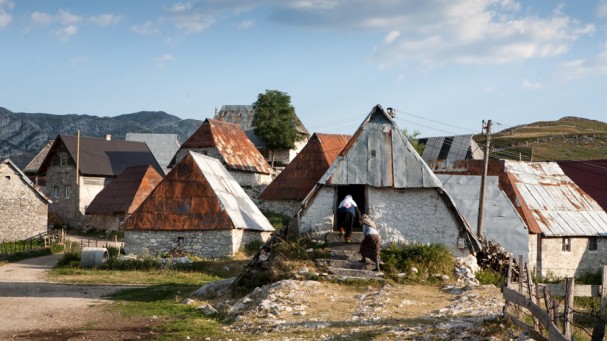 Little stone houses, 3 metres of snow in the winter and only 15 grannies and grandpas – the highest located village of Bosnia and Herzegovina: Lukomir, will stay in our memories.

This medieval mountain village is known as „the most isolated settlement in the country“. For half of the year one can get there only on skies, crossing a long plateau covered with metres of snow. For the rest of the year one can hike for hours or get there by jeep. This is what we heard and that was absolutely enough for us to take a decision of going there and staying at least for a night.

Driving through highland villages of Bjelasnica was a pleasure itself and every kilometre closer to Lukomir we were just more and more excited. We made a deal: if the road will be unstandable for our car – we leave it and walk further. But what means „unstandable“ after our weeks on the not-paved roads of Guatemala? The road is really ok and if you drive carefully, every single car will be able to cross it. And the views are truly amazing. Every few minutes one of us was asking for a stop: to look calmly around, to make a picture, to breathe freely.

Lukomir is situated on almost 1500 metres and has totally charming traditional architecture of the houses. There are made of stones with cherry-wood roof shingles. They look like they would squat very close to the ground, not to be very visible, not to get attention, not to get too cold.

There are only 15 people living in the village, very old ones, and only during summer months. Since 2 years they spend the winters a bit lower and they come back only when the snow melt. All of it fells a bit like a trip to a place time has forgotten. Only elderly, and cows and sheeps. Many of the houses are standing empty, and even when it’s warm – there is a strong wind and it’s easy to imagine that this environment is really harsh and unpredictable.

And then it’s even more exciting to sit with 80-year-old Mejra, who is hardly walking but living at this beautiful spot on the ridge of Rakitnica Canyon. Or others her age: collecting the wood and making a fire in their little, fairytailish houses. Mejra and others were surprised that a little girl from the west doesn’t have shoes. Hanna answered in her favourite way: “Because I like and I can”.

The men mainly take care about sheeps and they live off the sale of sheep products. The women milk the cows and.. hand-knit their clothes: colourful, extremely warm and strong socks (which they use like shoes), the scarfs for their heads and kind of bandages, holding a coin on their forehead.

There is also a mosque in the village, and the graveyard and.. stecci – tombstones from XIV and XV century, which can be found across the whole B&H, mostly following the borders of the medieval Bosnian state.

Many of the villages like this were totally destroyed during the war. But most of them are rebuilt. While drinking a strong coffee in Lukomir we also heard a story about Umoljani, a neighbour village, where during the war all the buildings were destroyed, with the exception of the mosque. Why so? They say that long time ago, one Serbian guy came to the village with his sick son and looked for help of the hodza (Muslim preacher). The hodza managed to heal him. And then, during the war it happened that the father Serb was an army leader in this region and told the others to save the mosque. True story or not – the fact is that a beautiful, old-school mosque is standing in Umoljani.