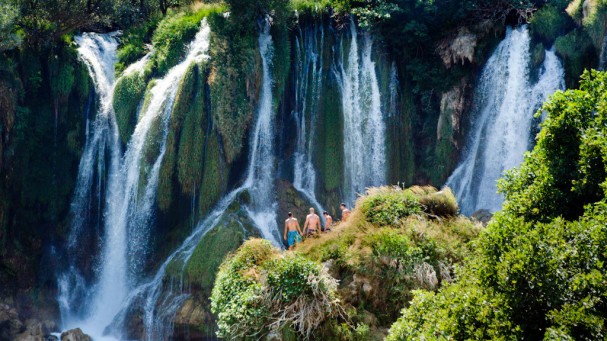 From the several theories about where does the name „Bosnia“ come from, I believe it this one: „bosana“ means water. Fabulous rivers, countless springs, turquoise lakes, breathtaking waterfalls and streams here and there. Thanks to them we survived 42 degrees and we fell in love with another country.

A real diverse beauty and harmony of nature we found in Bosnia and Herzegovina. Between the limestone mountains, fresh-green valleys, centuries-old forests and… the water. Everywhere: from a tiny streams to big, strong and self-confident rivers. Plus dramatically varied landscapes and climates: in Bosnia the Mediterranean influence meets the alpine one (the country is crossed by Dinaric Alps – the long chain of the southern Alps). All very rich in mineral deposits (mineral water is one of the Bosnian’s largest exports). Beautiful and still wild.

– You are going to Bosnia? – we were asked my some friends. – I know a lot of people going to Croatia, but Bosnia? Isn’t it similar?

Yes, it is. But less crowded and more… in the middle. Of problems but also of the world.

Not surprising that humans were living in this region already in the Stone Age (there is a cave: Badanj Cave with cave drawing from around 12 000 BC!). But to fit the pieces of human puzzles in Bosnia – is a challenging, difficult, maybe even impossible, game. The population nowadays is divided between three main groups: Serbs, Croats and Bosnian Muslims, each of whom the national and ethnic identity is a very sensitive topic. Let’s for now stay with the nature. This one is undoubtedly and unquestionable – i.m.p.r.e.s.s.i.n.g. 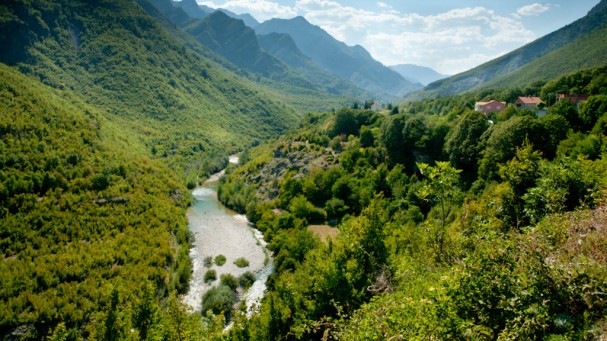 While travelling by car – we always want to sleep at the water: a river or a lake. So here we had: hard to make miss of the rivers competition, we loved them all: Drina and Sava on the north-east, Naretva and Bosna in the middle of the country and Vrbas more on the west. But I think our winner would be a river Drezanka, north of Mostar. The most beautiful water I have ever seen. The water, to which I couldn’t resist to jump in, even in a dress, even with dozen of Bosnians around me (the girls and Tom had easier: they just took off the clothes and jumped it).

Then there is a huge Jablanicko Lake, in the south-middle of the country: big area, with turns and bays, between the mountains (it’s an artificial lake formed due to hydro-electric dams). Full of places, where you can eat, what was just caught: very big carps, trouts, basses and fish, which names I don’t know. We liked a lot the quiet Ramko Lake, with a little island in the middle. That’s the place where Hanna and Mila fell in love with doing the laundry and we fell in love with the idea of them doing it.

What made us smile was a little artificial lake, not far away from the big artificial Lake Modrac, close to Tuzla: called by the locals Ontario Lake with a play ground for kids, in the water. The real name is Bistarac but people seem not to remember about it. What made us laugh was another artificial lake: in the middle of Tuzla city: Pannonica. I guess very needed (because of the heat) but also kind of kitschy: with the cascading waterfalls and crowds of crowds of people. 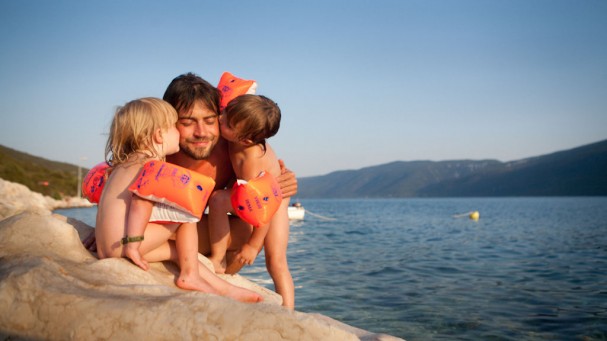 Probably the most fun we had with the waterfalls. We visited only four of them, in different parts of the country: Duge Waterfall (30m), Skakovac Waterfall (98m), Kravica Waterfall (25m but stretching over 100m across) and Pliva Waterfall in Jajce (27m, in the city!), but it’s still more than we visit every year in Germany or Poland. And when it’s so hot – there is nothing nicer than little drops of water, flying with a wind from the waterfall to your face.

All in all, I was very surprised to get the information that only 0,6% of the territory of Bosnia and Herzegovina is protected (standard is around 7%). Less than 1% of such a beautiful country!

And we were lucky with this amount of water on our way. Girls were starting the day with sweet „pływać!“ („let’s swim!!!“) and finishing with the same. So who needs shower after such a day? And I.. had my first time.. shaving my legs in the mountains’ river.

Aha! I would almost forget! Bosnia has still the sea! Or a little piece of the access: 23km of the seaside. We touched it too!