There is one part of the travel preparations I really want to learn and have a serious problem with. We are usually not planning much, and this is ok. BUT putting together two facts: the time you go somewhere and the temperature you can expect there at this time, makes sense!

It happened for the second time during our travelling. First one was 3 years ago in Azerbaijan. It was impossible to stay in Baku in that August. We were melting, jumping from one air-conditioned cafe to another. And spending as much time as possible outside of the city, looking for shadow and looking for the mountains.

This summer it happened again: in Bosnia and Herzegovina. Our time in the mountains, in the valleys, at the lakes and rivers – was awesome. But visiting two main cities: the capital Sarajevo and the main city of Herzegovina: Mostar, was a nightmare. It was just so hot that I could hardly think about anything else than ice tea. Girls wanted ice-creams all the time and we had no problem with buying them. We decided to take it easy and simply not try to fulfil our city-touring plans.

Btw, this is the most important thing, in my opinion, when you travel, and when you travel with kids especially. Don’t be fixed to your plans. Be flexible, be happy with that comes next. The museum you wanted to visit is closed just today? Check what you can find next doors. You’ve got lost? Be happy you will see something nobody else did. You didn’t make it to see 10 points from your list? Who cares, you will anyway not see all the places of the world you want to.

When we had a plan (to get in one week to place x, to meet with somebody in 12 hours somewhere, to…) – there was stress, there was hurry, there was no fun. I know that not everybody has this luxus to travel for few months. But even one week – how is it better to spend: running through Rome or having a lovely coffee on a sunny stairs and feeling the atmosphere of Rome, which will always stay in your mind? People remember the most those moments, tastes, smiles.

But coming back to Bosnia! Both: Sarajevo and Mostar we just „felt“, instead of proper visiting. We met with friends living there, we visited some photo exhibitions (next post about it), we ate, we drank. There are no good pictures or stories from there for you. Well, this happens. 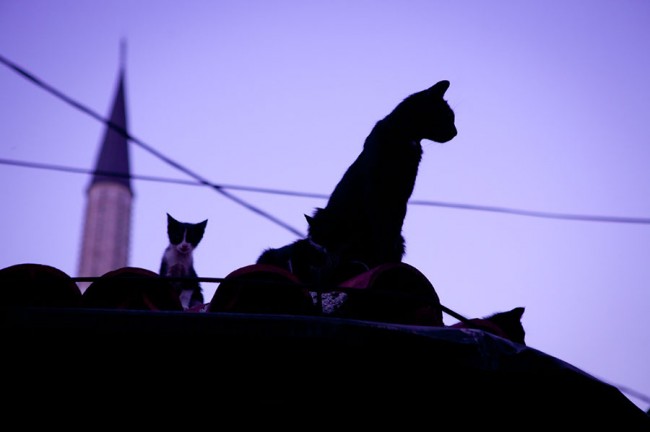 In Sarajevo we felt good, at home and inspired. Hanna loved the cats on the roofs, Mila loved old-school playing grounds. Tom didn’t like the girls too much (he said: they are pretty but very distanced). And I can say that Sarajevo became our favourite city at Balkans, even without a real explanation. 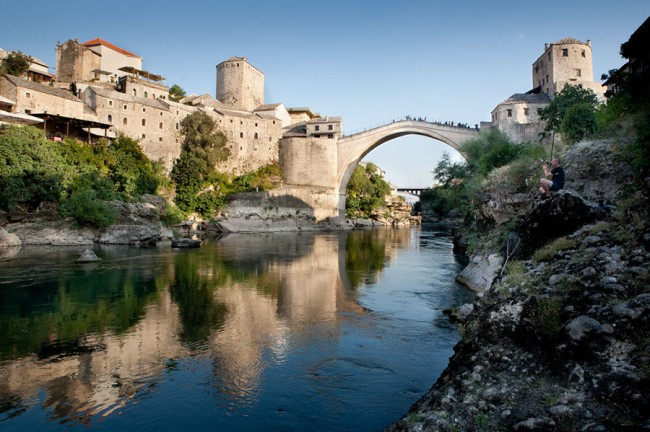 Mostar was on my bucket-list since I remember. Not sure how old I was when I first time heard about the war and about destroying this symbolic bridge in Mostar in 1993, but since that time I had somewhere in mind that I want to visit this place. Especially that its history touches the medieval times and for centuries was a very very multicultural and multireligious city. Standing on the top of the bridge (the Old Bridge was reconstructed in July 2004) and thinking about the „united“ or not-united city (there are two bus stations, there are two hospitals, the school systems, etc..), is being disturbed by hundreds of tourists (a lot of Poles!!) and guys jumping from the bridge down and collecting money for the show. Maybe a pity, maybe life should go on.

Funny thing happened to us on the bridge. Somebody came to us, and said to Hanna in Polish: – You are the little Hanna, right? Wish you all the best, the Family! – I think it was the first proof that we are travel-brities already. LOL. Until some stranger thanks to it wishes us the best, it’s ok ;)