Almost exactly half of the country of Bosnia and Herzegovina is called Federation. This one, in contrast to Republika Srpska, is mainly inhabited mainly by Bosniaks and Croats.

As I already wrote in the previous post, Bosnia and Herzegovina (BiH) is divided into three bodies: Republika Srpska, Federation and Brčko district. We spend one day in Brcko, and there rest of the time we nicely divided into both.

At the end of 1995 the Dayton Peace Accords were signed. Since that time BiH has embarked on a not-easy, slow, long and painful process of stabilising the nation’s economy. The process of reforms has been for all this time slow due to the corrupt governments. Right now the unemployment rate is still high and hovers at around 40%.

We have our funny theory about the unemployment rate in countries: the higher it is, the more friendly people are there, they drink more coffee on the streets and are smiling more. It’s a bit a joke, but a bit not.

What is sad and important is that the imports to BiH are at least 6 times higher than exports, limiting the local production growth. So we decided to support the local production by buying a local rakija. The best one: north of Sarajevo, on the way to the Skakovac Waterfall. 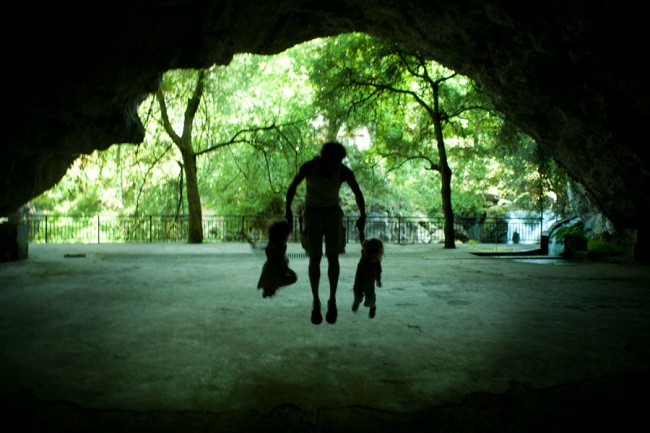 Also the tourism doesn’t work too much. Except the capital: Sarajevo and Mostar (about those places – the next post!), we basically didn’t meet any tourists or travellers. But there are places really worth visiting: like the Srebrenik fortress, just 36 kilometres from Tuzla. You get there by driving between those sweet houses surrounded by gardens with apples, plums and pears. The view from the fortress is quite staying in the memory: endless plains of the region called Posavina in the sun…

We decided to cross the whole country, so the end station was the beach at the seaside. Getting to the Bosnian seaside is not that obvious and may seem confusing, there are two ways of doing it. One, by land, is a narrow road, which winds through the hills towards Hutovo. Takes a lot of time and emotions at the curvy turns. The other way is much faster and easier to drive, but you have to cross Croatia (at the Metkovic border crossing) and re-enter BiH on the way to Neum. The seaside is only 24-km-strip, but it still gives you a holiday, hot feeling. The most far away place at the seaside is a Klek Penisula. The most far away place at the Klek Penisula, is a little stony beach, when you illegally cross a long tunnel in the rocks. There we took our Adriatic bath!

During the trip we found out that in BiH there is not only Medjugorie – very well known by catholics, but also the holy site at Ajvatovica – the largest Muslim pilgrimage site of Europe! Not far from Prusac village, in the forest, we made a small break, drunk a holy water (there is a legent that an old grandpa was praying there for a water for 40 days and on the 40th day a large rock began to tremble) and tried to imagine tousands of people in there.

The last interesting part of the country is Brčko. It’s a semi-autonomous district, very important and strategic place between two parts of Republika Srpska and Serbia. When the Dayton thing was signed, the future of Brčko was „to be decided later“. So it still is. But this largest port town in BiH, situated at a lovely at Sava river seems to be a happy and very well of place. And the coffee… Oh yes!