We visited the Maya ruins in Tikal in the early morning (Guatemala) | The Family Without Borders
Guatemala
April 18, 2012
Likes 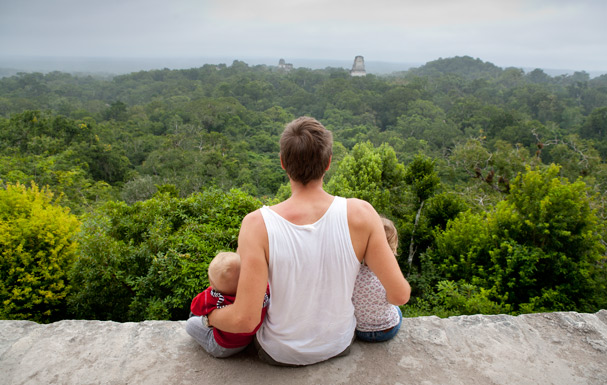 Tikal National Park was on our absolute-place-to-go-list. Even if we already visited Maya ruins in Mexico (Chichen Itza, Palenque and Tulum), even if the park is situated on the super north of Guatemala, in not super safe region – was clear still in Berlin that we will visit this place. Not because it is so known and since more than 30 years is on a UNESCO World Heritage Sites list. Not because the steep-sided temples are rising 60 metres above the jungle. But mainly because it should be still quite wild, situated in (!) 550-square-kilometres park! There are thousands of ruin structures on this area and only very small percent of them is uncovered and partially restored.

We decided to get as much as possible out of Tikal, so we stayed for a night already in the park. We got up before the sunrise, woke up the kids, packed some food for a breakfast and entered the main part of the park.

What a crazy feeling to be there alone! The noises of animals, songs of birds and this strong smell of earth makes you feel like thousands years ago, when the first Mayas just settled there. They came around 700 BC and stayed there for sixteen centuries! It was rediscovered in the middle of XIX century by Guatemalan government expedition and then explore, explore and explore by Swiss, British and Americans.

I won’t get here into architecture details of the kingdom. That would be only copying books and leaflets about the Plaza, Acropolis and all the temples. I’m not any expert in the topic, I don’t find it the most exciting there.

But family, lonesome breakfast on the top of the temple – it’s the memory which will stay in our heads forever. The jungle’s smells, high humidity, ubiquitous ants made this day very special.

The only pity was, even if we were the first ones there, that we didn’t meet many animals and birds. But singing „lalala, adventure, lalala, let’s go” Hanna… was maybe just not the best company for shadowing a wild life of the jungle!