Copan Ruinas: The Paris of the Maya world (Honduras) | The Family Without Borders
Honduras
November 4, 2012
Likes 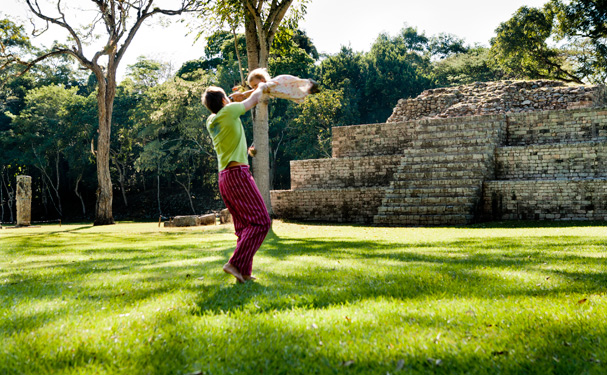 We saw Maya ruins in Mexico, we saw them in Belize, and in Guatemala. Of course we had to use the chance to see them in the last “Maya country”: Honduras. And even if visited in the hurry, and even without massive pyramids, having well preserved intricately carved stone sculptures make an impression. First ceramic evidence showed that Mayas were living there already in 1400 BC. Isn’t it crazy to watch a piece of art, which is almost 3,5 thousand-year-old?!

The ticket to the ruins is totally overpriced and there are still discussions between archaeologists if it is really only Maya heritage, or maybe Lenca tribes also had their influence over there. But just try to imagine at least 20 000 people in there, building the pride of the kingdom between 5th and 9th century…

At the end of XVI century a representant of the Spanish king arrived to Capan and met five families living there and not knowing any history of the ruins. It took 300 years to make the first map of the city but the things are being discovered still now.

The coolest part of the ruins are the Hieroglyphic Stairway with 64 steps and several thousands glyphs (but a bit in random order, because when first archaeologists uncovered the stairs, the big part of it collapsed). 10 metres wide form of the longest known Maya hieroglyphic text. Not decoded text yet…

In near the ruins you can also meet many parrots – most of them set free after being brought up in the nearby Macaw Mountain Bird Park & Nature Reserve. We visited the bird park an can absolutely recommend it.

In the town Copan Ruinas we stayed for two days in a nice, clean and afforadable family run hostel Yaxkin Copan – very close to the main market square of Copan Ruinas.