The smell of Guatemala | The Family Without Borders
Guatemala
May 3, 2012
Likes 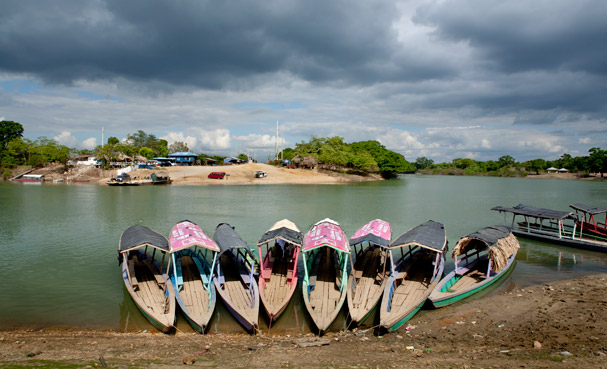 From those few thousands of Guatemalan roads – we learn our lesson. About driving carefully through all the holes in the roads, about not driving at night (holes+no light but also security issues), about not judging the amount of driving hours or days just by map. You can be really surprised how long it can take to get from place A to place B, which looks on the map like… hmmm, in the worst case 50 kilometres. Those kilometres will very fast change into much more on the curvy, dangerous road and the only thing you can do is taking it easy, not planning much and having the food with you in the car.

Of course we spend in Guatemala more time than planned. We felt in love with small towns, our source of fruits and “pollo con papas fritas” (chicken and fries, only this, e.v.e.r.y.w.h.e.r.e!), which we called “drive-through”.

Everything gathered around the main road – and main road full of people: selling and buying. You are driving this road by car. So what? Wait until the crowd will be all the platanos, nuts or papayas. Or maybe you also want to buy it? Just open your window and ask for anything you want. The speed is not a problem, because you don’t have any speed. No-teeth lady will pack anything you need in some old newspaper and deliver to your window. Pay and go. If you can. The only problem with those “drive-through” towns was when our girls were sleeping. Crossing such a town is like turning on the radio on the full sound: talks, music, cock-crow, maybe el plátano, maybe la papaya?!

After weeks there we totally got used to baskets with food on women’s heads. To the kids wrapped in a kind-of-sling and carried on the back of mama, all day long, during all her daily activities. To the poor houses, build of anything: palm leaves, old tires, boxes, blankets. To dozens of girls in every river, washing their clothes in the sunrise. To “tumulos”, small hills on the road build against the higher speed. Higher than 10km/h.

Every day life in Guatemala was sweet like “rosa de jamaica” drink, made of hibiscus flowers (the only problem was that you have to visit bathroom often afterwards, so we didn’t let Hanna drinking it, not to stop the car all the time).

Waking up in some palm plantation, cutting nails of girls, meeting some animals (or at least signs with them), eating a lot of fruits and meeting a lot of people speaking languages we have never heard before.

There were many people telling us not to visit Guatemala. Because still every man has a gun, because in many places people are not trusting travellers. Maybe. But we got wet in both: Pacific Ocean and Caribbean Sea, crossed the highest point of the Pan American Highway (above 3000 metres), saw at least six volcanoes and still nobody kidnapped us, nobody robbed us and almost everybody was smiling to us. Or at least to the kids.