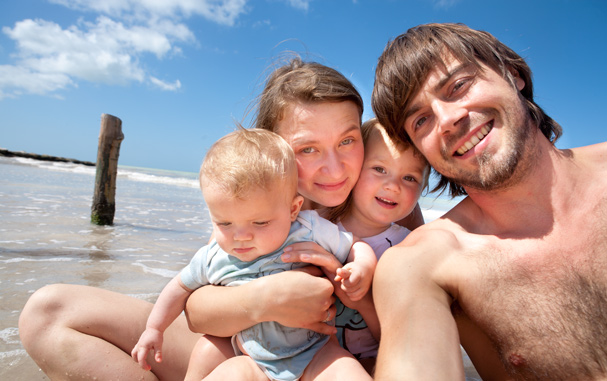 Tiny island, on the north of Yucatan Peninsula, sandy streets, never ending beaches and a crazy turquoise water. We are out of season, so many touristic restaurants and shops are luckily closed. It’s calm, time goes slow and already from the ferry from Chiquila we see pelicans!
The way of moving around on the island are golf carts, hundreds of small, yellow cars with people greeting one to another.

We hit the beach and three of us (Mila is just not whispering yet) whispered a huge “woooow”. Taking off shoes and clothes and running into the water. But after leaving the water something was wrong. Bite after the bite. Mosquitoes attacking in the middle of the day, on this beautiful beach? Oh yeah. The island Holbox is between locals called “the land of mosquitoes”. They are there all year long, with a bit different intensity (don’t wanna know how is it there in the worst period, in June).

On Holbox you can just beach around, go surfing, go bird-watching (the island is home to more than 150 species of bird), swim with whale sharks (but not in this time of the year) or for example visit “Punta Mosquito”, place with a lot of flamingos. The name doesn’t sound very inviting but Hanna (ok, we too) was very keen to see those pinky guys.

Was already afternoon and we didn’t have much time until the last ferry would take us back to the main land (where are car was waiting for us) and walking with Hanna is not a top-speed-walk, so we took this golf cart taxi. We arrived in Punta just in time to say goodnight to flamingos and in few minutes sun went down and the small hell started. Everything a bit like in fast-forwarded movie: jumping on the cart, driving with a crazy speed to the harbour, killing mosquitoes on the back of the poor driver, passing by a huge machine driving through the streets of Holbox and spreading around a lot of anti-mosquitoes smoke, buying a ticket for a ferry between all the people jumping around not to be eaten up and hiding on the ferry.

We heard that after the dusk on Holbox there are few ours of “bzzzzz” silence on the streets. But we decided not to check it!