Totopos and chili | The Family Without Borders
Mexico
November 8, 2011
Likes 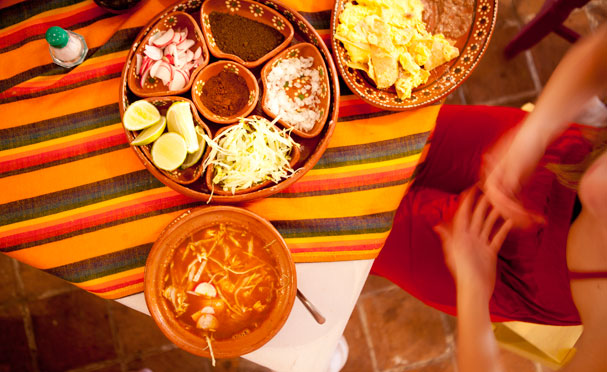 And what to eat in Pozoleria? Pozole, of course.
I was never a food expert, not even a food fan. Only since my visit to Jordan and two pregnancies afterwards I realised that food can make me a little bit happy. But so many people is talking about food in Mexico, that since we are here, we had to check it out.

Sweet place we found for it: just in the middle of Cancun, next to Parque Las Palapas, a restaurant based in the beautiful building: “Pozoleria”. Why called like this?

Because what they are specialised in, is “pozole”, a nice soup made of special kind of corn (cooked for long in advance) and meat. What I like is the fact that all the other ingredients you get on a separate plate and it’s your own choice what you through inside. Can be onions, must be lemon, can be avocado, green chopped salad, radish, and chili of course.

In general the Mexican cousin we discovered until now is very much based on corn, beans and chili (dry and fresh, doesn’t matter, is everywhere in everything).

Every meal starts from “totopas” (flat, round or triangular corn thing) with different “salsas” (cold sauces, might be for example green made of green tomatoes, might be red with tomatoes and chili peppers).

Then for example “enchilada” (tortilla rolled around a filling and covered with a chili pepper sauce, filling can be everything) or “enfrijada” (also something rolled around something, this time with beans sauce). Not needed to mention that the practise of rolling tortillas around other food dates back at least to Mayan times, right?

What I like the most are cold non-alcoholic drinks: “jamaica” (called also “Agua de Jamaica” or “Rosa de Jamaica”, made by dried hibiscus leaves and flowers) or “horchata” (which I knew from Spain, made of almonds, here is made of rice).

Tom’s favourite dessert is “flan”, something a bit like creme brulee.

Hanna, like probably every kid on this planet, loves ice-cream. In Pozoleria, ice-cream: mango with… chili, of course.