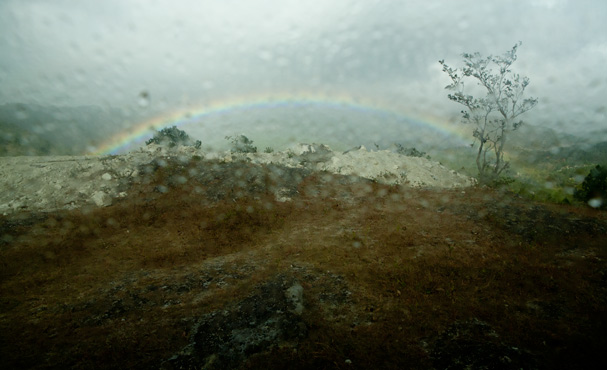 They call it cloud forest. Or fog forest. Or mossy forest, nuboselva, bosque de ceja, bosque montano nebuloso and hundreds other names, because such a forest one can meet not only in Central America but also in Argentina, Bolivia, Chile, Ethiopia, east Iran, Japan, Malaysia, Philippines and Papua-New Guinea.

But once you get higher – you leave the clouds behind and can enjoy really lovely mountains’ people of Honduras. Small boys are surprised because they have never seen a blond small girl (who btw even doesn’t ask, simply joins the game and is so happy about it!). We were surprised how windy in can be. Welcome to La Ruta Lenca.

In Santa Rosa we changed the tires (luckily), in Gracias (which doesn’t have street names!) we last time connected with the internet, in La Campa we had a break for running a bit, and we spend a lovely day in San Manuel. For sure you can’t get lost there but it’s nice to calm down in such a slow, far far away place. There was this woman, waiting for a bus, with a 1-day-old baby. She will drive now on this bumpy road to Gracias, because there is the closest doctor. Or this old lady, who would give Mila all the sweets from the shop, just for her one smile. – We don’t have pretty babies like this – she said. Hanna at the very end of our visit found a horseshoe. We take it home, piece of luck from Honduras!

Strange feeling gave Marcala, at the southern end of the Ruta Lenca. Small town with a very strong indigenous history and character. Oh no, here nobody smiles. I think it was first time ever we didn’t talk with anybody (except the car workshop guys.. yeah), was sooo difficult to break ice with them. But everything smells like coffee there, the coffee from Marcala was the first one in the whole Central America who got some serious stamp protecting the authenticity of beans from this region.

Lenca people, the main citizens of Honduras mountains, are the largest indigenous group in the country. They are often mistakenly identified as related to the Maya people but this is because the Lenca language shared some similar features with major neighbouring language families of Mesoamerica. But there is no documented evidence of genetic similarities. The origin of Lenca populations has been a source of ongoing debate amongst anthropologists and historians. Some scholars suggests that the Lenca were not originally indigenous to Mesoamerica region, but migrated to the region from South America, something like 3,000 years ago. For sure they have the most beautiful pinkish clothes I saw in Central America and a nice tradition of guancasco. It’s an annual ceremony by which neighbouring communities (usually two) gather to establish reciprocal obligations in order to confirm peace and friendship.