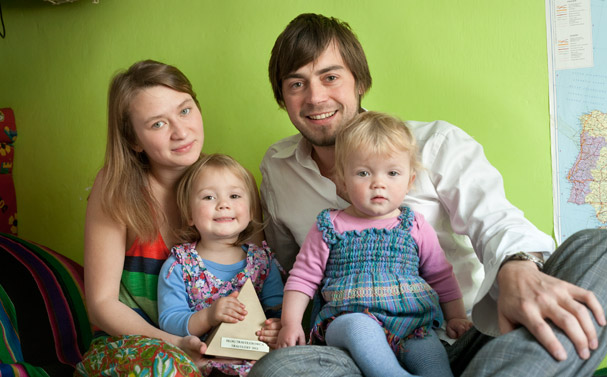 We were sitting on the terrace of some small hostel in Honduras, just after meeting with biggest parrots we have ever seen, when we got an email telling us that we got nominated to this prize. We were freshly after almost sleepless night of updating the blog and we were crazy happy that some committee of important heads decided to put us between 5 best travellers’ blog.

The prize should go to the traveler who “takes the readers of the blog in most effective way from the travel reality into the virtual world”. We were always putting a lot of energy to choose the best pictures, to check the information for the blog posts in few different sources, but was it enough to win such a prestigious title?

For next two months the readers were voting and we were observing our growing feelings (“so nice to get nominated, yes yes, it’s already a lot to be between five best blogs, but but… you think we have a chance to win..?”). And on 23rd April everything was clear. We are the Blog of a Year 2011.

Martyna Wojciechowska, the editor in chief of National Geographic magazine explained the nomination: “(…) …Because they always with humor and witty comments report from different corners of Central America (…) For all the sceptics who are sure that travelling passion and happy family life cannot go together (…) Anna and Thomas are travelling with two small kids: Hanna and Mila, and are breaking the borders of a typical domestic existence.”

How nice to hear that! Especially that the concurrency was strong. One of the competitors was a project we were mentally supporting since long time. “Żywcem w Afryce” (zywcemwafryce.wordpress.com) – a brilliant idea of few people trying to bring a lovely culture from Polish mountains to black Africa. Another one, with whom we toasted some glasses of wine already after our victory, was Piotr from “Rowerem przez Kordyliery” (www.onthebike.pl). There was still “Na Filipinach” (www.filipinos.pl) – blog with amazing pictures and “Blogiem dookoła świata” (www.religia.tv) – with very interesting posts.

National Geographic Traveler honoured also, in other categories: project “Afryka Nowaka” (as the trip of the year), Piotr Pogona and Łukasz Żelechowski (as the Coup of the year), campaign “Traveling against the TV” (as the campaign of the year), Prof. Andrzej Kokowski, Marcin Piotrowski and Artur Troncik (for the discovery of the year) and Anna Olej-Kobus and Krzysztof Kobusa (for the book of a year). And the biggest dignity for us was to stand on the same stage with Janina Ochojska, who got the Grand Prix this year.