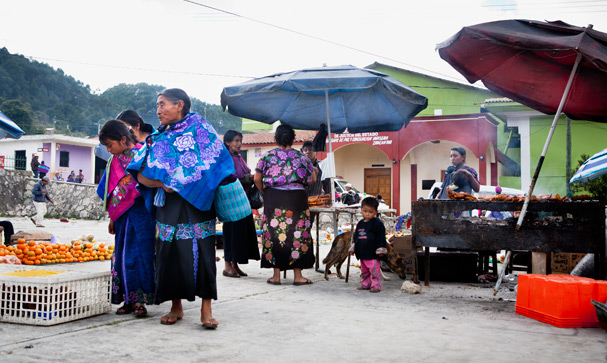 There is a sign welcoming you to Chiapas: “Chiapas, country of an amazing nature”. Indeed, the nature change immediately. Pine forest highlands, crazy green rain forest and colourful dresses of Maya women. Chiapas is one of 31 states of Mexico and is a home for twelve federally recognised ethnicities.

The strongest groups are descended from the Mayans: Tzeltal, Tzotzil, Ch’ol, Zoque, Tojolabal, Lacandon and Mam. In almost every village people look different, cultivating their traditions since centuries. Since centuries also they suffer economic and political discrimination in Mexico. That is how the uprising against the historical injustice with slogan “Ya basta” (“Enough”) started.

The story of the Zapatista

On the 1st January 1994 (the day of the NAFTA – North American Free Trade Agreement – initiation) left guerrilla army emerged from the jungle and occupied towns of Chiapas in a declared war “against the Mexican state”. The rebel movement called themselves Zapatista (Zapatista National Liberation Army – Ejercito Zapatista de Liberacion Nacional – EZLN) put together slogans of revolution of Mexico with antiglobalization rhetoric. But to say if easy: they just wanted to fight for better standards of Mexicans indigenous people.

Their leader: Subcomandante Marcos is probably ex university professor and not indigenous himself. Zapatista attacks finished in few days and the guerilla stayed in the jungle and fight the propaganda war, mainly by internet. They got a lot of support from international NGOs and other human rights fighters. The rest of the story goes like this: in 1996 Mexican government and Zapatista signed contract but in next years there were still fights and deaths; in 2003 they established regional Committees of Good Government (Juntas de Buen Gobierno) in the villages, set up schools and clinics, to democratise governance and teach the leadership skills; in 2005 Marcos announced a new political programme which included all marginalised people, not just indigenous; on the first day of 2006, Marcos, as Subdelegado Zero, went on motorcycle 6-months-trip from jungle to all the Mexican states to forge the lefties political front to make a peaceful revolution “liberation from below”. Since that time there was less and less news about the group, not sure what is right now going on with the leaders. We didn’t make it to meet with Marcos. But we did visit, also for some nights,  some of the villages.

Not that easy for us

There are few problems for a traveller in there: first of all – the trust of the people. Maya people, who live in small villages far away from touristic sights, are not very open for foreigners, after many years of bad experiences and being marginalised. Mostly they don’t really understand why should people come to their village and what do they want from them. They can easily get angry and aggressive because of watching their religious rituals. Second problem, connected with the first one, is the language: without having a common speech, it’s hard to explain that we are just very very interested in all what is different but we respect those differences and don’t want to cause anything bad. Third thing, connected with the first and the second one, is taking pictures. Some of the Maya believe that by taking a picture you steal their spirit. In Mexico and Guatemala during last years there were many situations of attacking travellers´because of this. So we can’t really show on the pictures this richness of the culture, of the art and colours.

And we also can’t show too much that this richness of the culture goes together with one of the biggest poverty in the whole Mexico. Most of the people live on the poverty line, 48% of the adults are illiterate and 70% of the families have no electricity.

But as usual it’s hard to say who was more interesting for whom: they for us or we for them. In a village San Juan Chamula, San Lorenzo Zinacantan and all the Ocasingo region, everywhere: our bowls with musli, toys of our girls, not mentioning our cooker – raised attention of everyone. Thanks to the kids, we could sit between many different pattern dresses but due to respect, we didn’t take the camera out.