In our last post about “Skiing in Gudari (Georgia, Caucasus)” told you how to get to the Gudauri ski resort and how are the skiing conditions. Here it’s all about what you can do except not skiing in Caucasus winter holidays. 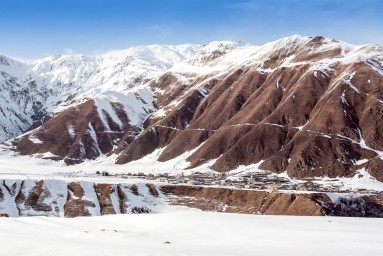 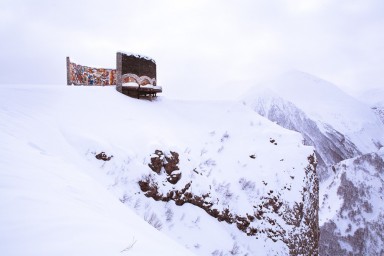 You can walk or drive around and just look on the Caucasus mountians! Already going up the ski lifts (you can use for it your weekly ski pass or just a single ticket) without skis or snowboard – is fun! The higher, the better: the views and sun-bathing! You can go down by the lift too, without any payment, you can stop by in one of few cafes and bars on different levels. Sometimes, when Tom was skiing, together with the girls we were „visiting“ him up there. Having lunch together or building a snow man. The highest point you can reach with the lift is 3,000 metres above sea level, and it’s quite an exciting view! If you are lucky, you can see Kazbeg mountain (with 5,047 meter the 3rd highest Georgian pick)!

2. Down the hill: sledges

Are the sledges only for the children? They are not ;) But for me the coolest thing is to combine mama’s fun and kids’ fun and roll down together. Our girls are not afraid of the speed or of the snow in their eyes – so we were combining point 1 with point 2 and were screaming really laud in the Caucasus space! You can easily rent bigger or smaller slights and sledges in few places of Gudauri ski resort, so no worries about it!

3. Paragliding in the clouds! 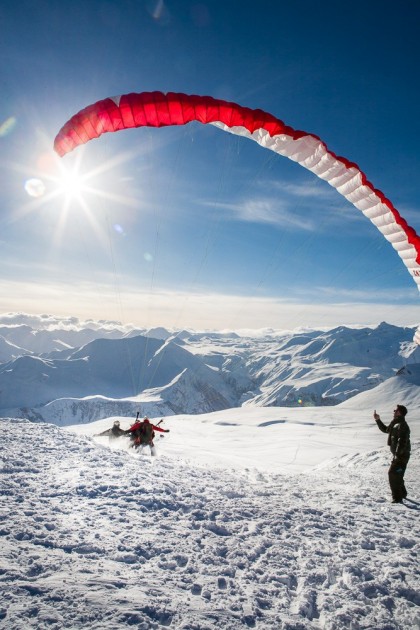 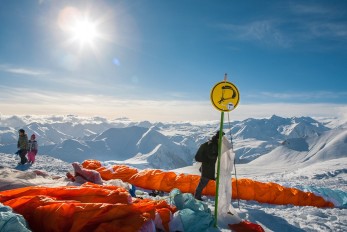 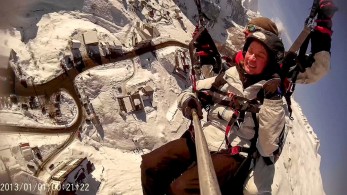 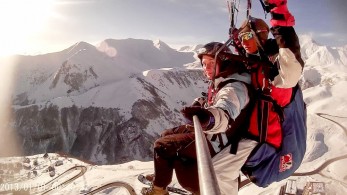 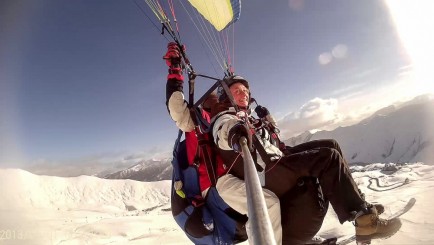 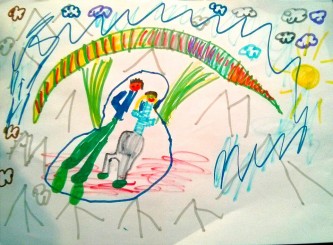 Paragliding in Gudauri by Hanna

When I saw the guys with huuuuge backpacks, I knew what I will do during our holidays. Such a backpack weights 35kg and has inside one of those colourful paragliders with two „seats“. You can jump with an experienced paraglide instructor, from almost the highest point. You have a choice: shorter or longer flight, with cheaper or more expensive guys (worth to talk!). There are usually in Gudauri every weekend and you can’t miss them.

I made a good deal, flying with friendly Max, for almost 15 minutes and landing in front of our balcony, on the bottom of the mountain. – You don’t like it? – he asked in the middle of the flight. – You are so quiet. – Hmm. It’s nice but not too much of adrenaline – I told him. And then he showed me how it can be more exciting :)

4. Why not a helicopter – affordable heliski? 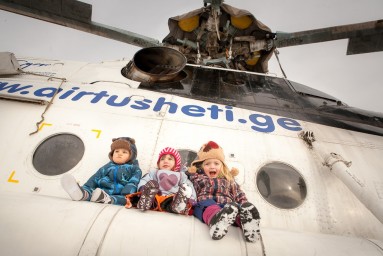 Gudauri is a heliski paradise 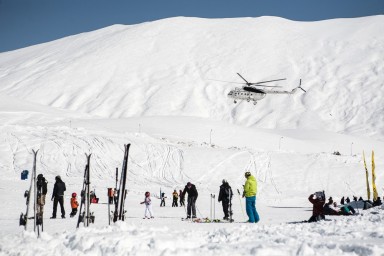 Gudauri is a heliski paradise

The most popular usage of helicopter in Gudauri is of course heli-skiing or heli-boarding, for what the helicopter will take you up to the untouched snow and you can ski down, as the first or only one and have hell a lot of satisfaction. It’s of course quite an expense. We heard that just a price of a petrol for one minute of flying helicopter is more than 50 Euros, so.. you can count for yourself how much day like this might cost, including the instructor, pilot etc. Helicopters in Gudauri do also recreation tours and I can bet that views from up there are awesome. We haven’t tried though. 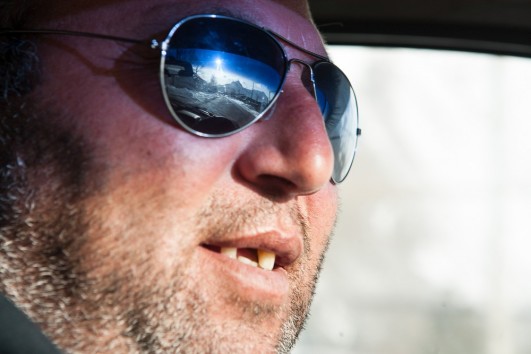 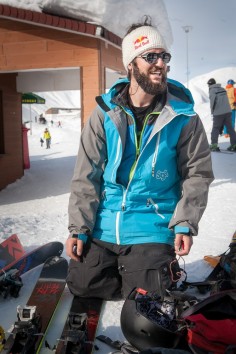 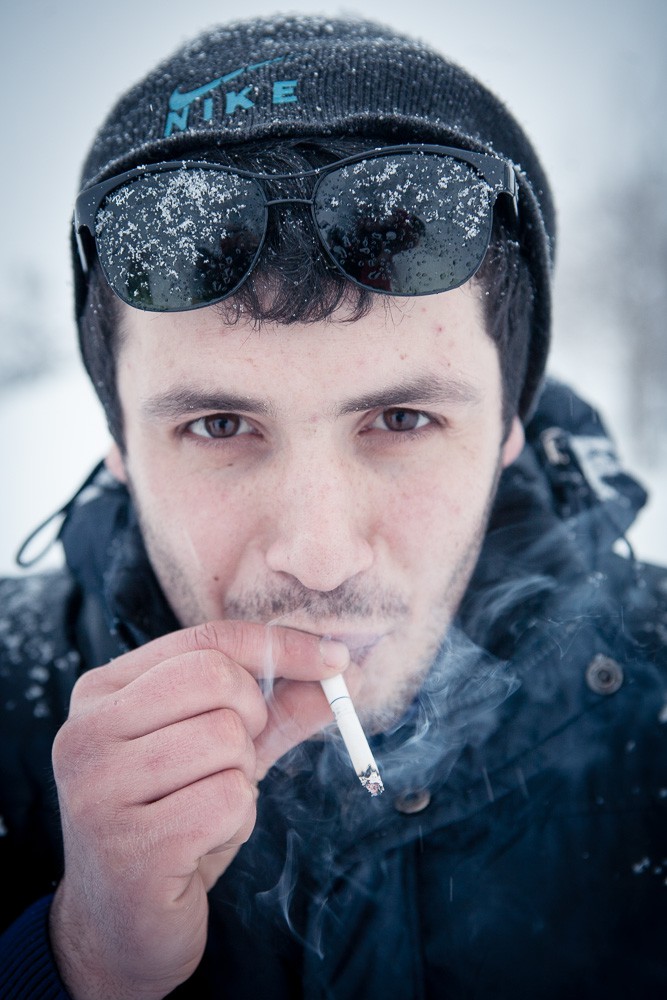 A boy from Tblissi in Gudauri

Since our longer visit to Georgia some years ago, we are badly in love with Georgians, so every possibility of talking to them is happiness for us. We will publish longer post just about the people we met, but here I can still add that kids + Georgians = a lot of nice reactions. They receive little gifts here and there, a lot of hugs and smiles. And since our girls are happy to learn some little phrases and were answering „madloba“ (thank you), they hearts of guys selling the wine or taxi drivers were melting. Read about our talks with the Georgians.

6. You say Georgia – you think food 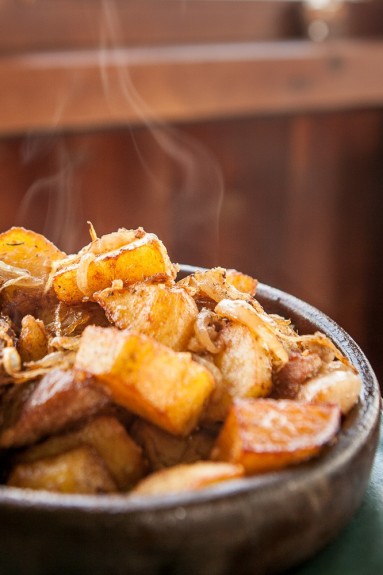 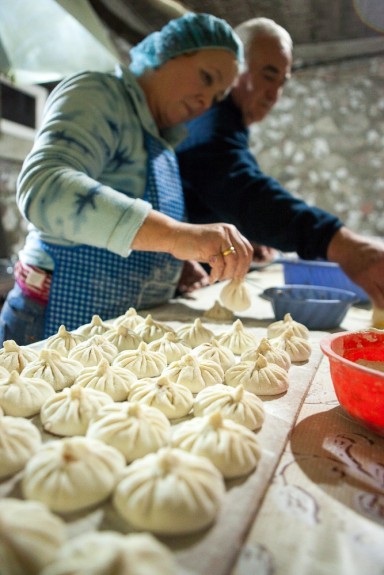 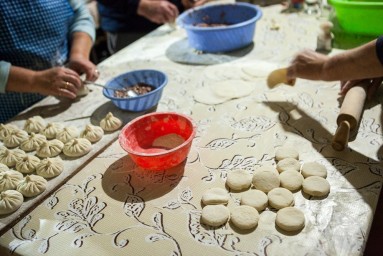 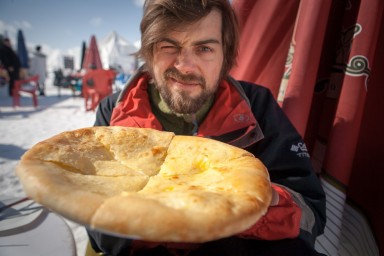 Khachapuri – Breat with cheese inside

Fried potatoes and meat, shashliks, khachapuri (bread with cheese inside) and khinkali – we already knew from the past (long time ago we were practising doing it in some Chechen village on the north of Georgia), so just every day, after the skiing or in between, we were grabbing the plates and glasses with wine (hmmmmmm) and simply enjoying.

Sauna, or in this region rather banja – is a fun to do after cold day in the snow. That’s what the people say ;) And we could imagine that, but since we like to do things together, this time we haven’t check it. But there are at least 3 good places in Gudauri!

8. A trip to Kazbegi

In god an our taxi driver we trust 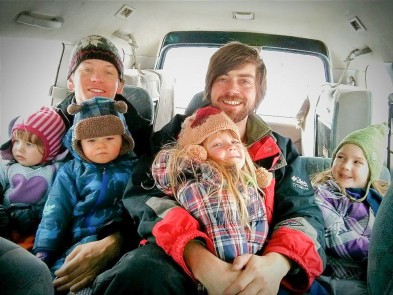 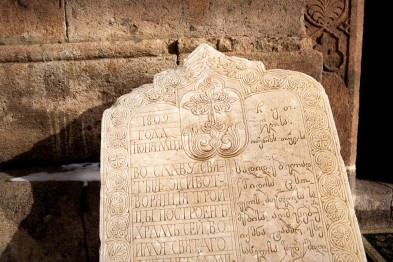 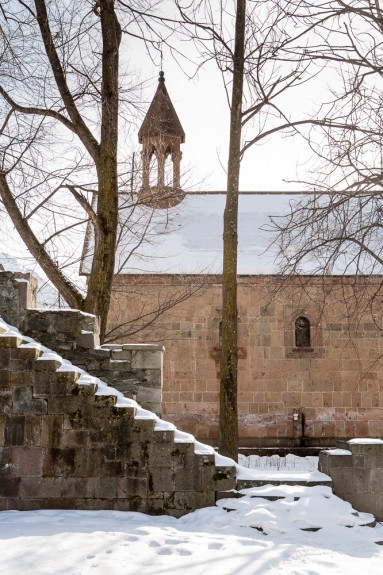 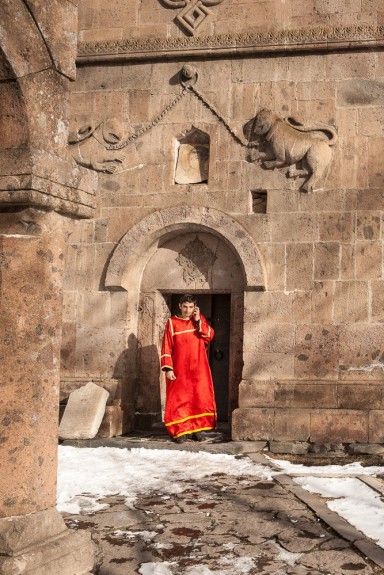 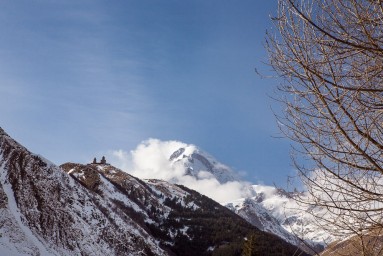 An unforgetable view in the church in Stepansminda 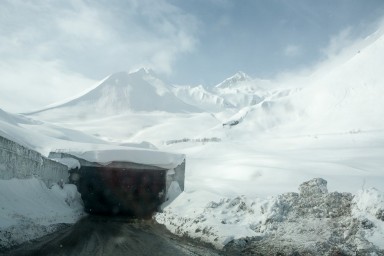 On the way to Stepansminda

Staying in one place is not exactly our thing and one morning I felt this strong need to „travel“. It’s not a big deal, since little parking in Gudauri is full of friendly drivers, who will take you for 15 Lari  ($7 / 6 Euro) just some metres to the lift but… for 50 Lari  ($23 / 20 Euro) for half of the day trip to Kazbegi (Stepansminda). It’s just 30 km each way, but the is a Jvari Pass (elevation of 2,379 meters) on the way (worth a stop!), amazing views, and the guy will wait in Kazbegi as long as you want and need to stay. Our guy still bought a bread for all of us and candies for the kids. We had a plan to reach the Gergeti Trinity Church on the top of the moutain (like with our little Hanna 4 years ago! I’m becoming sentimental ;), but it was simply too much snow to walk on the path.

If you like skiing, but not „just“ and „simple“ and „like all the others“ (like… Tom), Gudauri gives you a nice option to go with some local cool guys and their freeride skis up to some virgin snow and end down your skiing somewhere in the valleys, where a car will pick you up. We have a friend in Gudauri (he was our hitch-hiker back in 2010!), who is running a freeride company. Worth checking :) 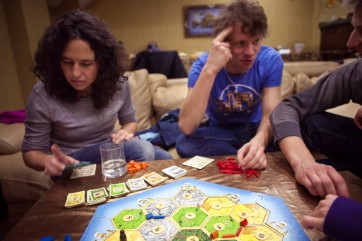 Playing settlers in the evenings 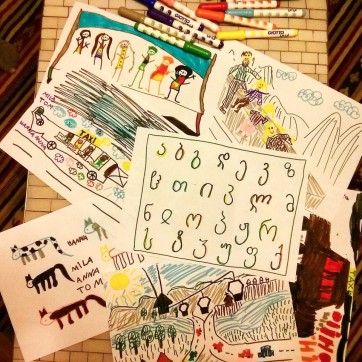 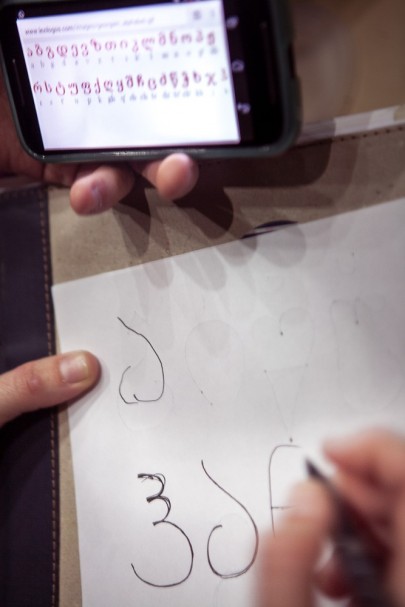 And if the weather is not the coolest (happens, right?) or when your muscles hurt, you might also stay at home! There is still so many things to discover! We were learning Georgian alphabet, watching Georgian books, painting a lot (that’s a nice way of talking with kids about what have happened during the day, what is different abroad etc).