„BOOOOOOM boooo boo bu buuu!!“ – just some metres away from you. Every few minutes! „Boooom!!!“ – a sweet fireworks just for us. As an award for few hard hours of fights to get to the volcano Mt Yasur, on our last night on the Tanna island and second last night in the country of Vanuatu.

That’s why we made this trip to Tanna island! To meet face to face this volcano! Do you know the story how did we get here? With that awful ferry boat for 16 hours? First check it out to understand more the level of the sacrifice;) And then, on the last afternoon on the Tanna island, we had to find a man with a car, who would agree to drive us for 3 hours on awful roads to the other side of the island. „Our“ family helped of course, and dear Tom took us on his pickup. We had a lot of sugarcane for the way, was just not easy for our asses to jump up and down on the stones and holes. At the end we still had a flat tire, so everything took ages. – Fuck!! – said Tom the driver, who also wanted to come back home, when it was still not dark. – Don’t say fuck! – Hanna, in English, reacted immediately and everything changed into funny and not so bad anymore. The other guy took us on his car and in the evening we arrived to Isarkei village, close to the entrance to the park, where Mt Yasur is spitting up his lava. We found Joseph’s family (somebody, still in Fiji, who has visited Vanuatu, gave us contact to this friendly guy!), who allowed us to put a tent in his garden (he has few bungalows you can rent, it’s called „Mountain Breeze“) and started to make our camp. No idea what time it was, when we were ready to go. Late! Was dark, our girls could probably already sleep but – heyyyy – it was our only chance to get there! The volcano should be really cool at night, when you can see little sparkles going up. During day it’s quite grey, all the the smoke and ash. 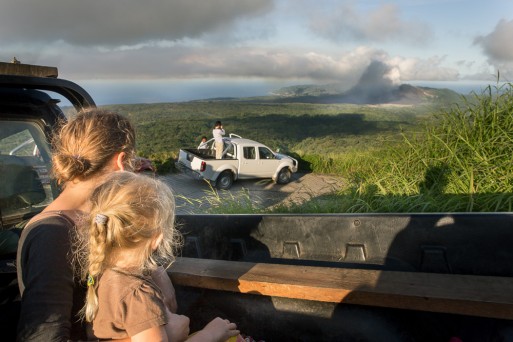 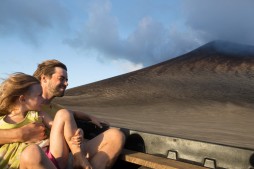 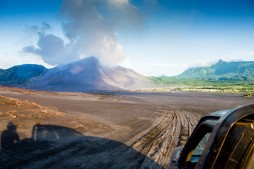 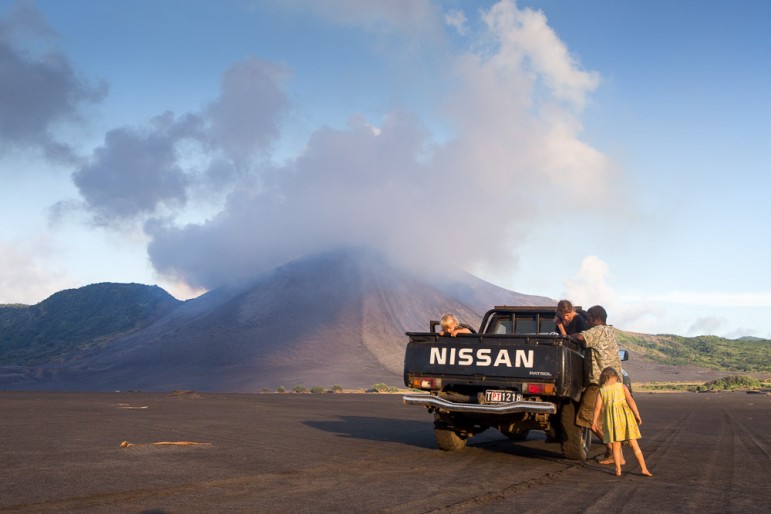 So we go! With backpacks full of food, water and a torch. We really didn’t feel too good to force our tired kids to go with us. But we always do so many things for them: stay in some villages days longer because of their friends, feed the animals for ours and read same books for the x time. Come on. Something for us tonight! (that’s how we were explain it to ourselves…)

It took maybe 20 minutes to get to the entrance to the park. We bought the tickets and started to walk up. One little girl (maybe 6? maybe 7-years-old) join us on the road. She didn’t speak, so we didn’t really understand what is she doing. Our girls were super-tired, so I was carrying Mila and Tom was carrying Hanna. Uhhh. Muddy road, 10 minutes, 20, 30… At the entrance they told us that on feet you can get there in 1,5 hour. Without kids. We made cookies break, sang few songs and went on. Uhhh, what a gym! Maybe after one hour, we heard the sound of the car. Brrrrmmm from up. – Papa! Papa!! – the girl started to scream. Oh god. That was really her papa, in the car. Joseph. He was bringing some tourists down, from the night tour. He took us to his car, we drove down with him to bring the tourists back and then up again!! From the place he could park the car it was only 15 more minutes. How happy we were to reach the edge of the volcano!! 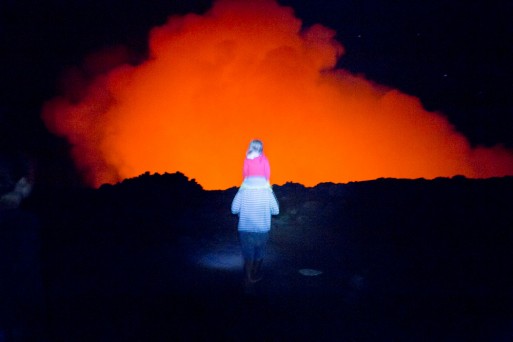 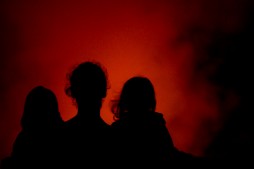 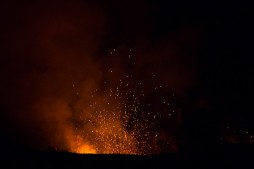 Eruptions of the active Yasur volcano on Tanna Island (Vanuatu)

And then, the drama happened. Hanna promised to Polish grandma that she will take a lovely picture of this active volcano. And on the top, in the most exciting, beautiful, magic moment, when we took our her little camera, we realised that it’s broken. Nothing works. Hanna bursted into cry and that’s how we spend next half an hour. Earth was shaking, views were never-to-forget and the soundtrack was full of tears.

After the chocolate she calmed down and we were just sitting and staring into the sky. Since that time volcano is the most frequent motive of the drawings of our girls and if anybody asked them about our Pacific trip – that is what they are talking about. I mean, hundreds of huge and small chunks of molten lava hundreds of metres in the air is something!!

Even super tired and in the middle of the night we couldn’t sleep. Sitting in front of our tent, feeling the eruption every few minutes, looking on the clouds enlighten by the lava and knowing that that is the end of our trip. On the next day we will fly to the capital of Vanuatu, day after to New Zealand and then back to Europe. How to sleep on such a night?! 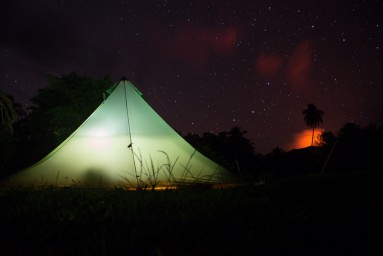 Sleeping next to an active volcano (Vanuatu, Tanna) 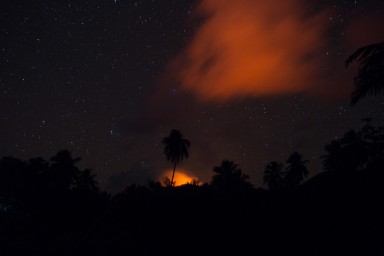 Sleeping next to an active volcano (Vanuatu, Tanna)

Next morning we were still experiencing the hills of the ash. Oh what a cool playground, on our top 3 list of the world’s playgrounds for sure! 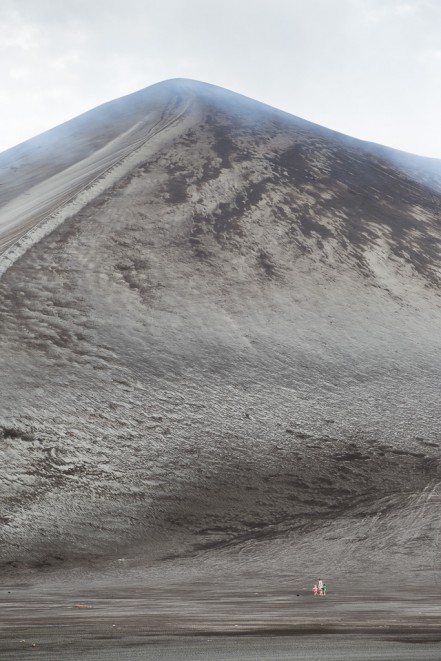 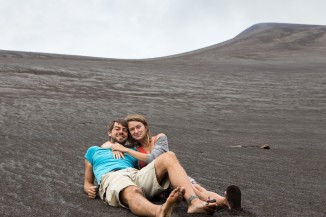 Picture made by Hanna 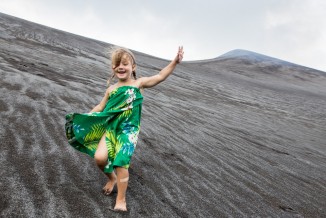 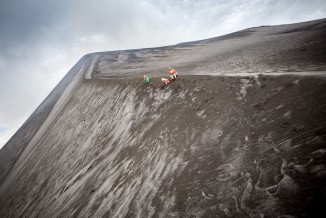 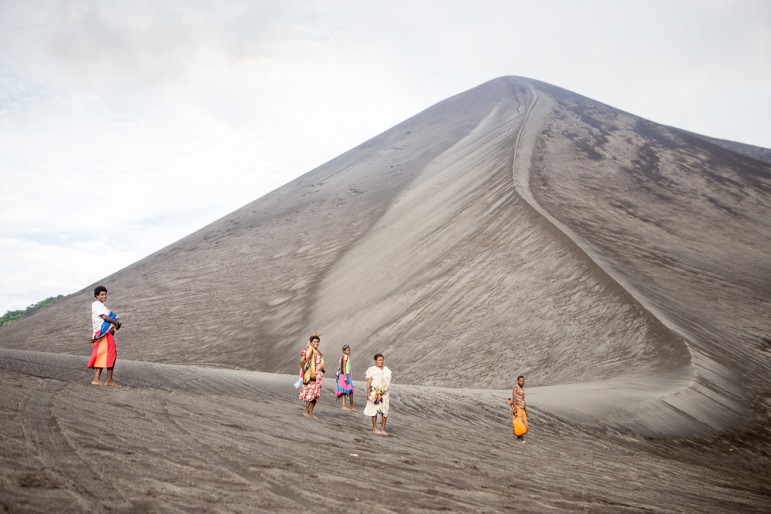 1. The volcano attracted the attention of… James Cook, who – thanks to it – discovered Tanna island in 1774.

5. The volcano is most active between February and April, during the wet season.

6. You can buy a half-price ticket on the next day (if you want to go again)

7. Most of the people (except the people travelling on their own yachts) come to Tanna on one-day-flight-tour from the capital Port Vila (it’s about 400-500 dollars, flight around 1 hour each way).

8. You can also make a scenic tour over the volcano, for another 100 dollars.