I knew we gonna attend this ceremony, since the moment I read about it in the guide. Sounded too intriguing. Merina and Betsileo people of Madagascar (2 of 18 ethnic groups) celebrate this ceremony only in winter (which means our summer), only in one region. We had to find it.

Andry, a guy from Antsirabe, where we were sleeping, told us that the family of his mother gonna celebrate Famadihana of her father in Manazary, a village 7 km away. 7 hilly km away, but we decided to rent some bikes and make it. To the bikes we’ve got 2 soft pillows (for our princesses) and started in the morning.

Takes us a while this biking, because already everything on the way is exciting: meeting the people, eating some street food (Madagascar is a country of street food, in every village people have open windows and are selling some little things to eat), watching all the clothes (the whole fields of clothes being dried on the grass) and talking with Andrey. We already have million of questions (I had in my head a vision of crazy ceremony, scary, with pieces of dead bodies flying around), and want to make sure everything will be fine.

– Can we just join? Nobody will have a problem with it? What if our kids would laugh? Why do people do it? How often?

– Mora mora. Easy. Let’s just take some rum with us – answers Andrey. Ha, no problem for us with this one. 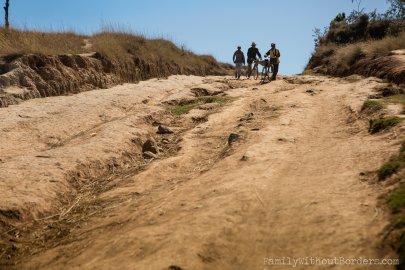 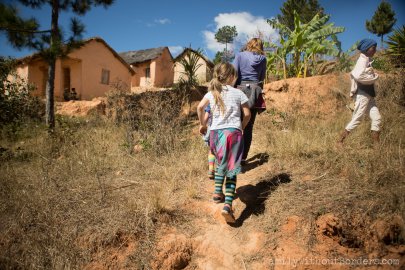 On the way to the village which will turn the bones (near Antsirabe, Magadacar) 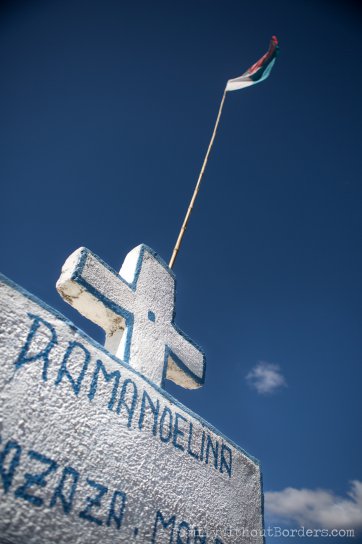 The family crypt and the Malagasy flag 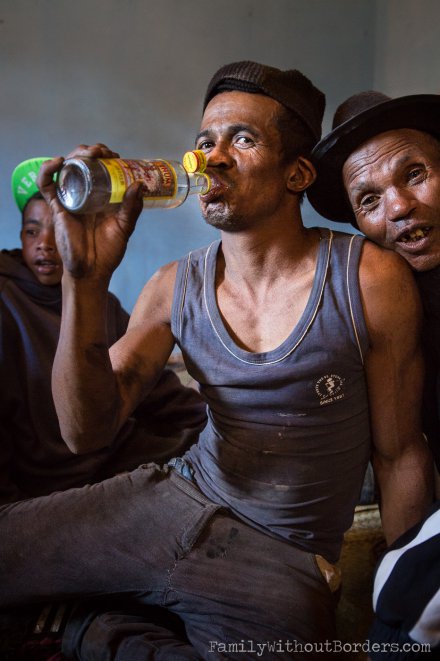 Rum is opening the doors for taking part in the ceremony (near Antsirabe, Magadacar) 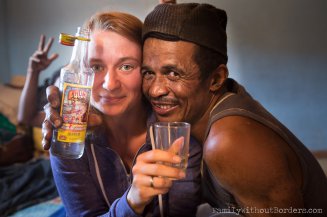 Anna also ‘had’ to trink 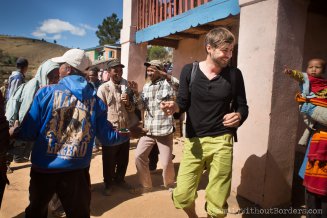 Tom is also tsara tsara, when he is dancing with the family 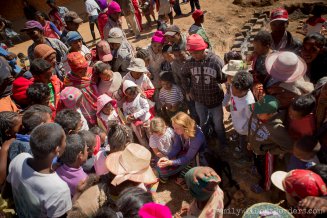 We are as exciting for the people there, as the ceremony was for us

In some point we have to leave the bikes and walk on a little paths between the rice fields. We hear some music from far but totally don’t expect maybe 500 people suddenly appearing on the top of the hill, next to the village. Everybody smiling. To us but also to each other.

The crowd immediately takes inside, to one house. To the closest family of the dead person. His son welcomes us and asks the women to gave us food. We fastly take out the rum bottle and… everything starts.

Famadihana is a huge party. Huge, happy, drunk party. All the family from the country gathers together, bringing the bodies (or parts of the bodies rather) of dead ones to one place. To the crypt of the person, they gonna celebrate for.

The person (a grandpa in this case) died some years ago (it can be between 2 and 7). But people here believe that his soul cannot leave this world, until the body has completely decomposed. So he can still be here, with the family. The last call for the party, for feeling the joy of life. 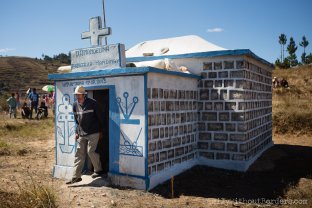 The crypts in Madagascar are bigger and more serious than houses…. 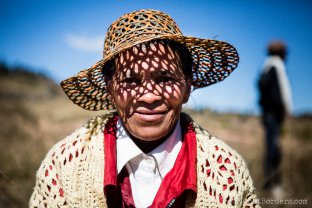 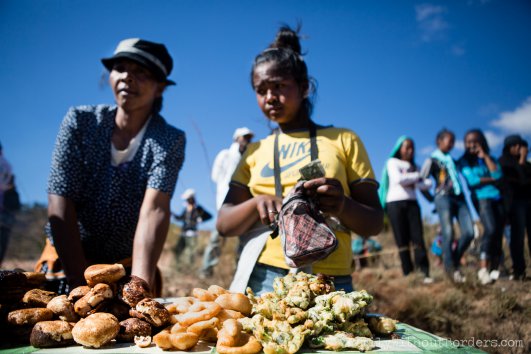 There is also a lot of food at the ceremony 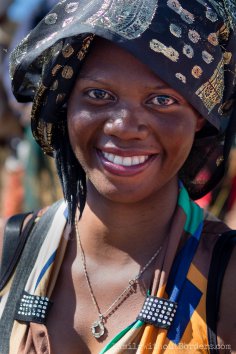 Everybody is smiling – no tear allowed! 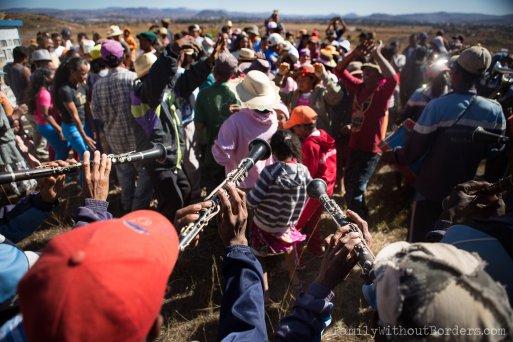 Live music and the family dancing next to their crypt. 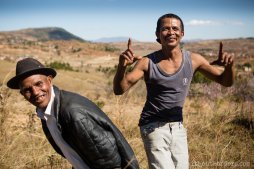 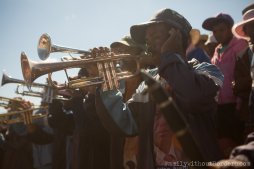 The orchestra – this is funky! 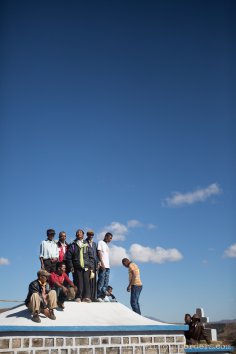 The men of the closed family clibing on the crypt. 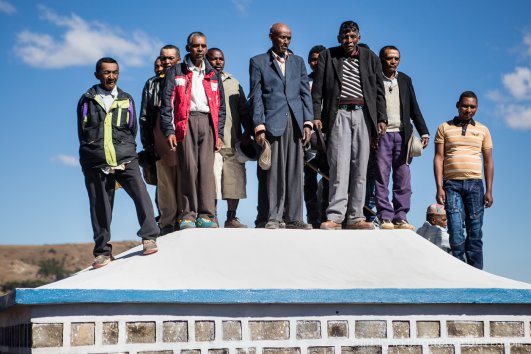 Listening to the anthem on the family crypt.

– It’s a chance of meeting with our beloved ones again – people tell us. – And it’s great way to reunion the family. People tell each other the news: about marriages, pregnancies, babies) and tell the stories about the dead one, talk with the kids about dead.

Doesn’t it sound good? We are welcomed as a family (maybe also the rum made the job!). It’s called „sao-drazana“ (contribution with a bottle or money, as an act of solidarity) and it’s brought by everybody except the closest family.

During this „turning bones“ nobody is sad (they say that tears are forbidden). You can’t imagine how happy the people are, when we join the dancing. People give speeches (for example, while standing on the roof of the crypt), sing the national anthem of Madagascar, eat together and just „be“. – Tsara tsara – we hear all the time. That is to our girls: – Pretty pretty. (probably also to Tom, dancing;)

I would love to meet like this with my family around the grave of my papa and drink his favourite whiskey together. It reminded me a bit to the Day of Death, we experienced some years ago on the south of Mexico. Let’s squeeze those good things out of live, instead of the sad ones! 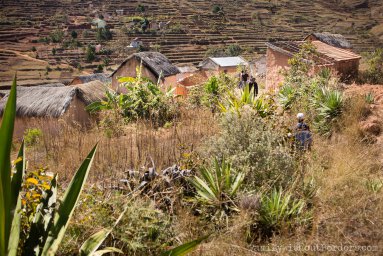 The village (near Antsirabe, Madagascar) 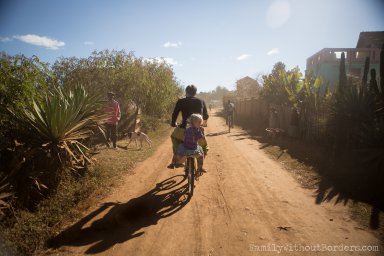 Two things made me think afterwards.

The first one is: that the ceremony is hell expensive (and those people here are really not rich) and that the crypts we have seen are much better than houses of the villagers. People spend more money on the dead ones than on themselves! But when I read more about the attitude to death (half of Malagasy adheres to traditional beliefs), I understand it much better! The death is simply not the end.

The second thing I was wondering about is: where does this tradition come from? Nowhere around (in Africa) people do anything like this. The most similar-sounding ceremony to this one takes place in… South East Asia (so more than 6000km away!). But… the first ever coming to Madagascar people came from… East Asia! Tadadadaa!