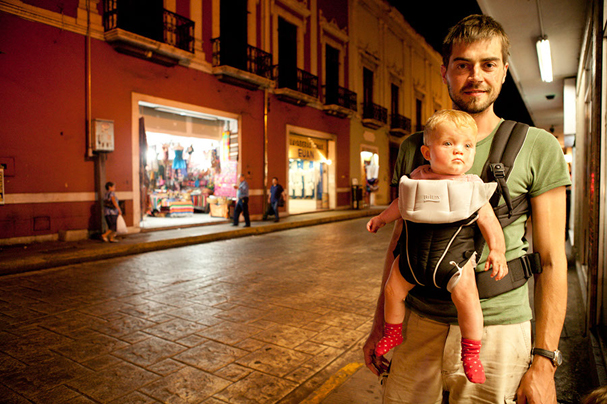 Merida is very alive, bustling city with many bookshops, libraries and music stores (how different from Cancun!). Like all the colonial cities, the plan of the city is easy to predict: the cathedral and official buildings around the main square (called Plaza Grande), which is ringed by different neighbourhoods (barrios). Each barrio has its square and park and church. Streets are going north-south and east-west.

And the streets in the centre are lovely but so narrow and so crowded that few minutes on the walk with our kids is more than enough. We tried, we tried hard, again and again but after few crossings we always had to make break to check if we still have all the kids and to be able to look around.

What was a nice surprise was a Zocalo Hostel with biggest and nicest breakfast we have ever had in hostels (and we visited quite some of them already).

Campeche, even more east, town situated on the Gulf of Mexico looks super clean and super artificial. Full of (more than 2000) perfectly restored colourful buildings, from which some of them have only a front wall, nothing else.

In XVI and XVII century it was a major port of the Yucatan Peninsula, rich city of Spaniards. And where there is wealth – there are pirates. For almost 200 years, since the city was founded they were terrorizing the citizens and finally in 1663 took over the city and massacred the people. Spain had to take action and that’s how the 3,5metres thick wall appeared, which parts are still visible.

The positive surprise up here was a wheelchair assessable public playing ground, first I have ever seen. Point for Campeche.

Going still east – we found a lovely fishermen village: Sabancuy. Tourists are obviously not often visible here. Very calm, few women on the streets, all the men on the boats. Peaceful and beautiful on the seaside, so we decided to ask some family to simply park our car on their ground and sleep there. Memorable scene: Tom went to the fence with Hanna on his arm, the guy came with… machete.

Worked out, of course, as always. We slept in the car, somewhere in between of chickens, turkeys and dogs, living altogether in perfect symbiosis and cleaning up the mussels, the family is collecting on the beach, cooking and eating every day. Would have been impolite not to try this kind of breakfast. Hmmm, let me not explain the heavy feeling in my stomach afterwards.

But those are the best experiences we have, again thanks to our kids: living the every day life with very average family, just somewhere, outside of small village, washing the dishes and talking about this and that.