Mennonites in Belize: Unique meeting back in time | The Family Without Borders
Belize
May 14, 2012
Likes 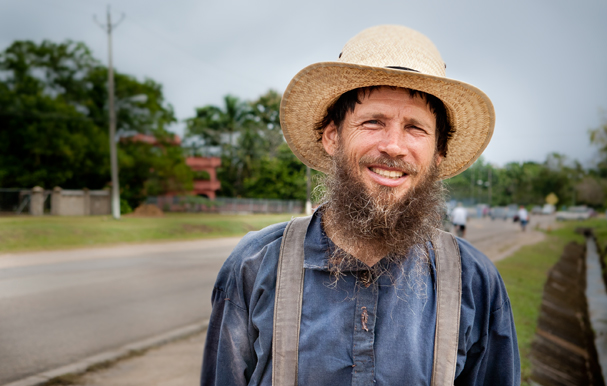 First impression from some jungle road: a crazy mirage or they are shooting a movie? Do you remember “Dr. Queen” series? Or “Little House on the Prairie”? Women in long, simple dresses and bonnets, men in denim overalls and hats. Those are the Mennonites, religious community and a much more exciting topic than beaches and the blue sky of Belize.

Blue eyes and not looking into eyes. Speaking old-sounding Low German (Plautdietsch). Marrying only the members of the community. No electricity, no music, no smoking and no drinking. No fun. – A lazy person has too much time to think of bad things, so we don’t allow anybody to be lazy – they say. So they work: from the sunrise to the sunset. Men – in the field, women – at home. Kids (having as much as possible is a God’s blessing) study bible until they are 13 and then… or the field or home. Between all the other super-relaxed citizens of Belize, who are playing drums, listening to reggae and wearing too short skirts – that was a real surprise.

A surprise was easy to be noticed but not that easy to be explored. Mennonites are a very closed community, living in different parts of Belize, in all those “the-end-of-the-road” places. Polite but not really willing to talk, helpful but not really inviting. No travelling, home schooling and not meeting “the others” if there is no serious need for it.

The early history of the Mennonites starts in the XVI century with the Anabaptists in the German and Dutch-speaking parts of central Europe. From the Netherlands they moved to Germany, Prussia, next step was Russia, and then to Canada or the United States. Then, in 50s, because the U.S. goverment wanted them to join the social security program, they moved further south, to Mexico. From Mexico, the Mennonites finally settled in a wild country called British Honduras (now Belize) in 1958. All of this wave happened mostly because of persecutions throughout the ages for their beliefs (particularly refusal to pay land taxes, support the military and school systems).

The first night we spend with them in the park, which was build four years ago, for the 50th anniversary of coming to Belize. In 1958 they made a good deal with the government of Belize: they could come, got help with removal, settled their colonies in the wild, got exempted from the military services and parts of taxes, got a guarantee of the freedom to practise their own form of Protestantism, got a right to lead their own form of govermenting: schools, banks and business. They are self-sufficient, strictly traditional and very church-based communities.

So already 54 years they spend in this exciting country. And even if they represent only few percents of the population of Belize – they contribute significantly to agriculture and the economy. They practise organic farming and supply the country in: watermelon, carrot, papaya, sweet pepper, cabbage, coriander, peanut, potato, corn, beans, tomato, eggs and chickens. They do the cattle and feed farming. They produce milk and cheese. They assist the commerce, carpentry and engineering. They make furniture. And big part of it with a horse wagon and no electricity.

Right now in whole Belize there are eight different Mennonites’ communities: Spanish Lookout, Upper and Lower Barton Creek, Blue Creek, Little Belize, Progresso, Springfield, Pine Hill and Shipyard. They speak English, often Spanish (because of Mexican past) and German. Or a kind of German (mostly they understood Tom but Tom didn’t understand them).

The communities are divided into two groups nowadays: strict one and more progressive one. But all of them look like a bit funny, blond German farmer. Strict Mennonites believe that modern technology contaminate their faith, some of them don’t even use rubber (which means that the wheels of the horse wagon are… made of metal only). Candles in the evening and a punishment for visiting an internet cafe.

Progressive Mennonites (main settlement in Spanish Lookout) have not only mobile phones and cars but also biggest car workshops in the country with wifi and good coffee machines.

We visited both: the car workshop and the most old-school members of the community. While sitting with our candles in the middle of their village – we were quite surprised when one after another, with their candles, they started to join us and tell their stories.

All the small things make those days interesting and unforgettable: the Bible even in their wooden toilets, instead of toilet paper you can use there pieces of old clothes and the toilets have small sweet holes for kids too.
Or the biggest “supermarket” in the progressive town called “Farmers Trading Centre” full of people, who don’t look into your eyes, not talking about a single smile.

One thing they have all in common: the belief that a photo is something bad. – You should love a person, not a picture of her – they were repeating. – All the bad things in the world started with loving things.
And to show the respect and gratefulness for their trust we tried not to take pictures. Was not easy!!

What else was not easy? Talking about the religion. Every single Mennonite asked us about our relationship with Jesus. Another common question was: how old is Hanna and when exactly have we married? (the answer unfortunately finished some talks: because on our wedding I was already pregnant and this is something they cannot accept). Then our social questions: about gays (this time not accepted by us: “not existing in our community, and will never do!!”), tolerance and bringing up kids. Interesting but sometimes scary.

The house, gardens, weekly market – maybe it is only the myth that getting in contact with them is so difficult? Or maybe we were again lucky?