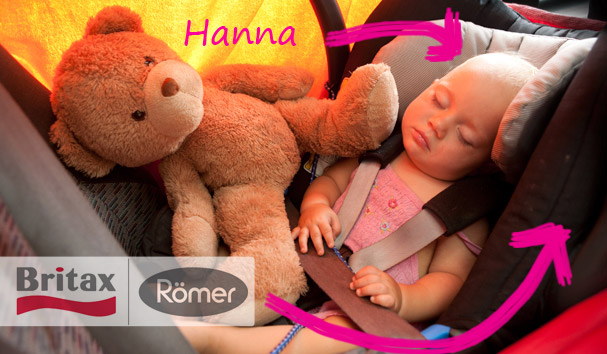 A baby car seat of Britax Römer was one of the things we really wanted for our last trip. Since we were on a road for 20,000 km, Hanna spent quite some time in this car seat. That’s why the it had to be good, comfortable and save. The one we had before did not exactly match these criteria.

We were not sure, which seat would be the right choice for us. So I (Tom) started to research a bit – checking test results of some trustworthy German organisations: The ADAC – the biggest German Car Association (results of the seat test of the ADAC) and the German state driven test institute Stiftung Warentest (results of Stiftung Warentest test).

Both tested the Britax-Römer seat Baby Save Plus as one of the best. The price was okay too. Hanna liked it much more than her old seat – so we bought this thing. At the end it was for sure a good choice: comfortable, not too heave, easy to carry, fastly to fix and it had a little roof which was sometimes useful a sun protection. Thanks to the users manual we also learnt that our baby has to sit backwards all the time. Because in case of a crash her big baby head is not flying to the front but stable in the seat. Which somehow makes sense, but we really didn’t knew it before.

Since we were very happy with Britax-Römer we asked the them if they don’t want to go with us on the Between The Oceans Tour 2011/12 – From Mexico to Panama. And they agreed. So we got a brand new red car seat for Hanna (a King Plus – what a name!), a cool kids bike seat for our Berlin tours and some carrier for Mila for testing.