Between the volcanoes: Lake Atitlan, Guatemala | The Family Without Borders
Guatemala
January 31, 2012
Likes 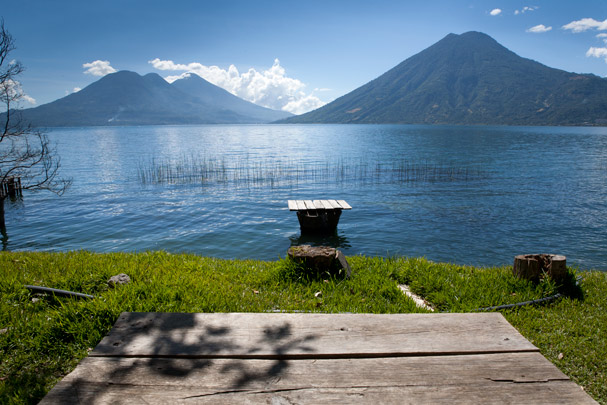 An old crater, created during the volcano eruption 84 000 years ago, is fulfilled with very blue water. The crater is not a small one (more than 130 km2) and not a flat one (down to 340m, the deepest lake in Central America).

The lake, surrounded by three volcanoes, gives a “wow” feeling. The San Pedro volcano, Tolimán and Atitlán are guarding the water, every day, in every weather. Then, when you get to know that under the water there are hidden archaeological Maya sites, you whisper “ahhh” again. How many secrets is waiting there to be discovered. Then, when you get to know that during the Guatemalan civil war, the lake saw a lot of cruelty and many bodies stay since then under the water, you think “uhhh”. How many things those hundreds of species of fish and birds have seen!

Around the lake: variety of coffee growth and farm crops. But also a lot of not discovered forest. There is no road which circles the lake. Communities are usually reached by boats. Communities, which got during years a lot of the Lake but also lost a lot. After the hurricane Stan (in 2005) and tropical storm Agatha (in 2010) the level of water increased for more than 3 metres, taking away gardens and houses of many Kaqchikel Mayas, Tz’utujil Mayas and other Guatemalan citizens.

In one such a garden we stayed. We were driving a very long, very bad and very curvy road, which suddenly ended. In his garden! San Marcos La Laguna was supposed to be a calm, pretty village of Maya people. Yes, it is pretty, kind of calm but totally fulfilled with travellers. But seems like this place attracted many hippies already in the 1960s and many travellers also before. People living around the lake belive in Maximón, a folk saint, pre-Columbian Maya god Mam, blended with influences from Catholicism and legends.

People coming here still believe that the place has a particular spiritual energy and in every corner one can find a possibilities of meditation, holistic therapies, massages, new-birth activities and don’t know what more. A bit too much for us.