First longer stop we had just near Odessa, at Kuyalnytskyi Liman. Locals are calling it Ukrainian Black Sea. But instead of nice bath in healthy mud, we had awful smell (I mean: really awful, just after waking up we fast left, without breakfast even) and instead of nice view on Jerusalem – view on factories and huge socialists blocks.

Somewhere down from Mykolayiv we met very friendly grandfather which was inviting us all the time, for fruits, for homemade vodka, for potatoes and fish. Fish which he is catching every single day in the lake. All the village is catching fish every single day in this lake. That makes such a funny view: men walking into the water and walking and walking and walking. Because the lake is very flat they can really walk far away. Then they are putting their nets and coming back next day. But it takes some time to find again the net, so lake is full of men (in clothes!) walking like in the park.

The grandfather, which is during winter living with his wife and grandson (his daughter and her husband died on AIDS) in Mykolayiv, is very self-sufficient. Except this every-day-fish he has in his garden all you can need: potatoes, tomatoes, cucumbers, courgettes, onions, garlic, carrots and many kinds of fruits. Tom was very excited to see how are they growing. And they guy has Yanukovych’s poster in his small house and loves Lukashenko. 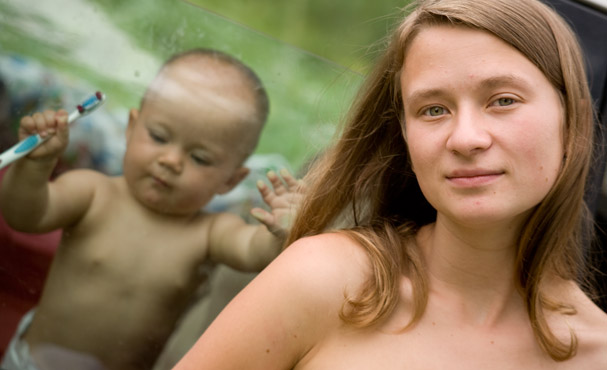 The nicest swim we had in Rybalce. Brigades of frogs saying hello when you enter the water, then birds flying around (maybe even pelicans – check out the next post!), calm fisherman on his boat. Very sweet morning there.