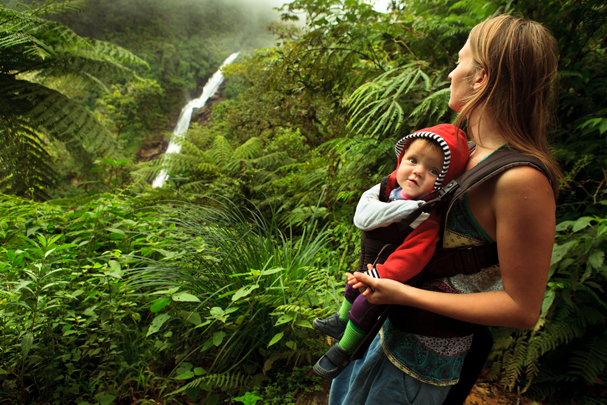 There are many undiscovered places in the region Baja Verapaz in Guatemala and hardly any guidebooks talk about the “Salto de Chilascó”. Those who do talk – tell that it is the highest waterfall in the whole Central America. In fact even Thousand Foot Falls in Belize is for sure much taller but still 133 meters of water in Guatemala make an impression.

Especially if getting there took a lot of our time, energy and sweat. It is just few kilometers to walk from the village but what a kilometers! Very steep path, with mud until the knees, where every wrong step can end up not very funny for our kids hanging on us on the front or on the back. I still can’t believe that we didn’t come back in mud from heads to feet.

The way was supposed to take us around two hours. But we are obviously not local teenagers who can jump from a stone to a stone and run through the forest directly to the waterfall. We took a “safe” path, still feeling very unsafe. Beautiful surrounding: vivid orchids, giant plants and ferns, all growing in heavy moisture. Fields of broccoli and maize from time to time.

On the road from Guatemala City to Cobán (CA-14) and take a detour East on km 144 (there is a sign: Salto de Chilascó). After ca. a 12km unpaved road (30min drive) you will arrive to San Rafael Chilascó. You can’t miss the information office.

From there you can take a guide to the waterfall and rubber boots (very useful!). The walk from there takes around 3 hours minimum. A horse doesn’t make it much faster.

Than always follow the main path. If you find the first barrier – climb over. You made nearly half the way!

Our Hanna was a real fighter during this hiking: smiling and singing even if for most of the time we literally talking had to run. People we met on the way (also with a small girl) gave up because it started to get late and the way back (up) usually takes even longer than way there (down). We gave each other still one more hour to try to reach the waterfall and then run like crazy back, not to stay in the jungle after the sunset. After the sunset the rain forest is really really dark.

My heart was bleeding not to go further to reach the bottom of the waterfalls but that was one of those decision you take while traveling with your kids and which you maybe wouldn’t have taken while traveling just with a friend. Happens!

But after reaching back our car and feeling (or rather not feeling) all the muscles of my body I was sure we won’t try the same walk tomorrow just starting earlier. The limit of serious hiking was over for few next weeks, I’m not a very walking animal.

But for those who will still visit the “Salto de Chilascó” we have few tips: 1. start early, 2. hire a guide (young locals are very happy to join you, for small money: you can support them and not get lost), 3. borrow rubber boots which locals offer you in the village and …

4. afterwards eat dinner with the family on the corner of the village (and about this point there will be our next post).