Meeting the "Gypsy King" and his people | Moldova, Soroca | The Family Without Borders
Moldova
June 9, 2010
Likes

Soroca, on the north of Moldova is well known from being the Roma “capital” of Moldova. Above the town: the hill with shining roofs. Shining roofs of huge houses, being build for years, piece by piece. Because what is really important for Roma people – is to have a representative house, best with sculptures, columns or glittering copulas.

Not difficult to find this bright hill in Soroca. On the hill: only one small shop with ice cream (it’s really hot!). And no “others”. Black hair, amazing-eyes girls in the gardens, and boys with good watches and expensive (-ly looking) belts.

Standard of their life seems to be completely opposite of life of Roma we met until now, in our countries. Those houses, cars, white shirts. In the downtown of Soroca we heard two explanations of this situation: selling horses and/or drug trafficking.

Getting into the neighborhood, especially with Hanna, is really easy for us. She is our key to people’s hearts – everybody is just stopping, smiling and… that is enough to start the talk.

From kids to the king 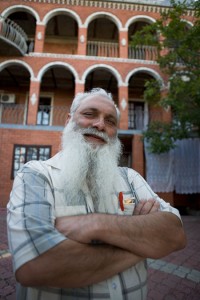 Small girls with colored nails comparing Hanna to Hanna Montana. Small boys having no idea about the internet but showing us houses and view over the Dniester river. Then their place overtake youth talking about drugs (what can be cooler than mentioning that you know all the prices and sources..?). And then Vasil is coming, maybe 50 years old man, which knows everybody on the hill. Including the wife of the king. And from the wife of the king, as everybody knows, it is very close to the king. That’s how in one hour we cross few big steps in society structures and end up drinking wine with the king.

“The Gypsy King” is actually the Gypsy Baron of Moldova (and has five other titles on his business card). Arthur Cherari is standing on the top of the structure since 1998. In that year his father, who was the king of all Soviet Union Roma, died.

– Now there is democracy, our king is not anymore telling what to do – Igor, 20, tries to explain the system. – He is rather advicing and helping to find solutions where there is a problem. Like a judge.

Even while having really diverse language and cultural habits around the world all the Roma have as one of the main rule: respecting the authority (can be the king, baron or simply the elderly).

Everybody has to stand up then Arthur is coming out of the house. He has big, white, Santa Claus like bear, glasses and very friendly eyes. Speaks 7 languages, likes shooting, playing piano and collecting porcelain (some exhibits are worth 30 000 euros, as he likes to mention). He continues talking about studies and languages, adoring Hanna and asking for more and more pictures with her.

Hanna, our “Gypsy baby”, finds herself perfectly in this group. Taken from arms to arms, happy about playing with all the jewelery (and she wanted to take away golden teeth of women!!)

We get soup, freshly baked cake and sweet cherries, even for taking away. And alcohol. That is the difficult part of the day, because all the guys wants to drink with Tom. And we want to come back to Chisinau the same evening. So I’m emptying his glasses of wine and vodka. Girls are laughing, men don’t really know how to react.

– Here is your bag, with all documents and money inside – Arthur winks to me at the end. We go out through garden, where two old Czajka cars are standing (the “Russian Rolls-Royce”). One of them with a hole after shooting on the front glass. We can’t really find out how did this happen, if it is not just a small, meaningful joke at the end. 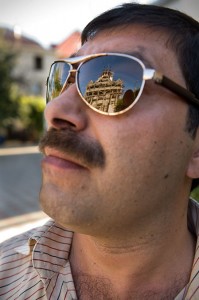 – And my biggest dream is to be rich – Vasil wants to show us houses he is dreaming about. They are being built for many many years, starting with huge roof, columns or sculptures (horses, lions, eagles). The owners are working abroad and coming to Soroca from time to time to build again a bit of their dream house. We watch with Vasil houses with bricks from Montenegro, balcony from Saint Petersburg or stone vasas from Kiev. What does it mean that those parts are from those places? Vasil as an answer move his hand in very understandable stealing move. – So you will not join the wedding tonight? – he asks for don’t know which time at the end.