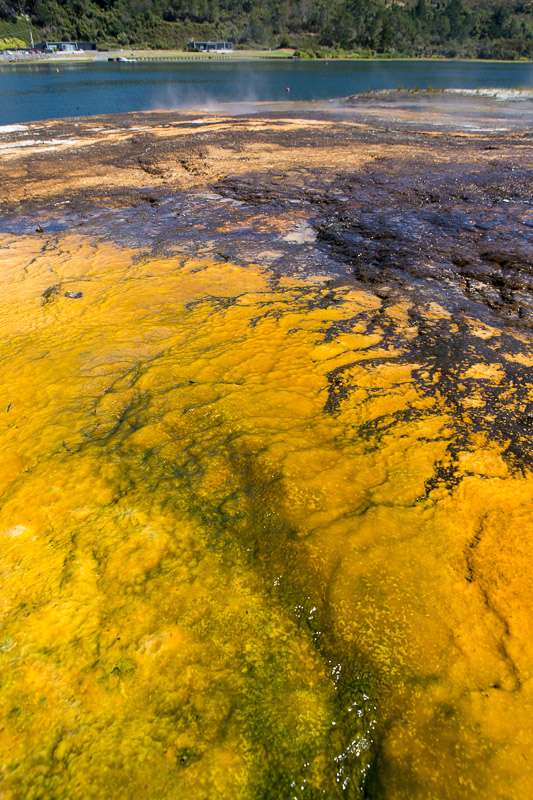 Even if 3/4 of the original site lies under the water, because of the dam on the Lake Ohakuri, the rest 1/4 is simply crazy. Walking through this geothermal park and boiling hot springs, between vibrant, unnatural (but so natural!) colours, makes an impression. And even the fact that it’s not crowded at all (this is not a favourite fact of the owner of the place: Craig Gibson) is an advantage! You can calmly discover every corner and read the explanations (very needed, especially when your kids are asking about everything). 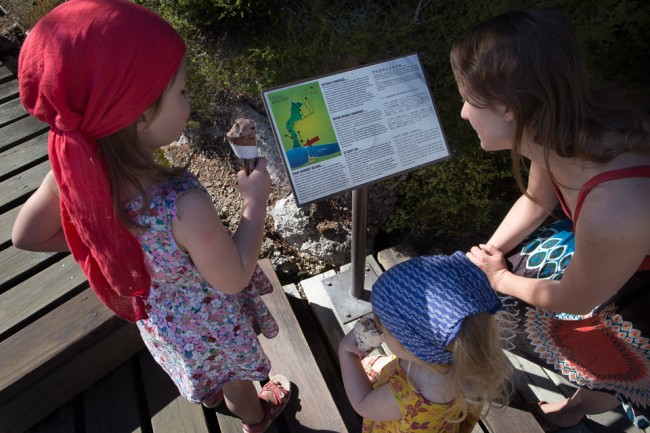 The area is constantly changing, due to 23 active geysers, playing freely around. “Orakei Korako” means “The Glittering Place of Adorning”, because Maori women where spending their time here, preparing for different important celebrations. 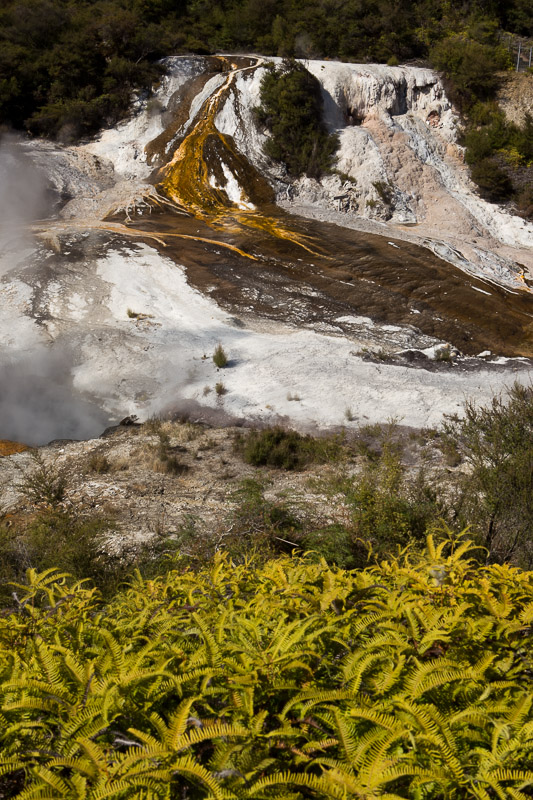 3 terraces were formed by the earthquake almost 2000 years ago. The steps are now topped with black, green and yellow algae – which grows in hot temperatures. Just guess how many litres of water flow over those terraces a day? 20 million! 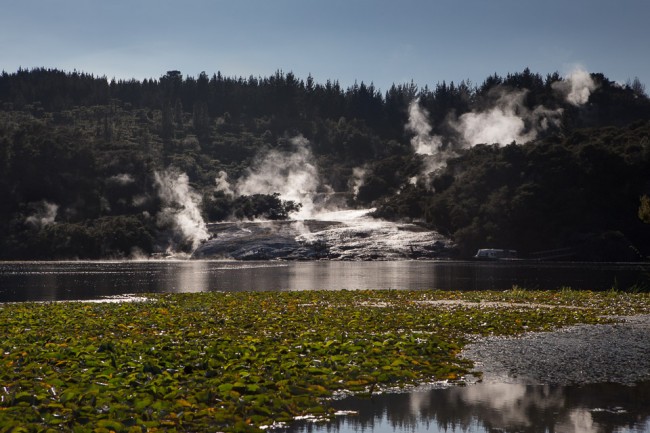 Another terrace, the largest, is covered with white sinter coating and looks like a cloud or snow. The last thing worth to mention is a Ruatapu Cave, and is the one of only two known caves in the world in a geothermal field. 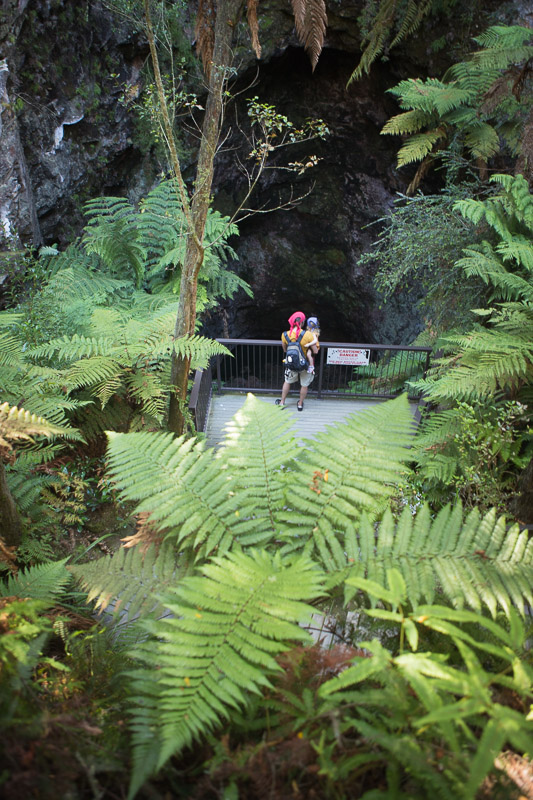 All those little miracles are located in a forest and when you walk through it and have a closer look on all the plants around, you can better understand that 80% of the nature of New Zealand is possible to meet only in New Zealand. – Mummy, is it a polypody? Mummy, is it a urtica?? – No exactly… ;) 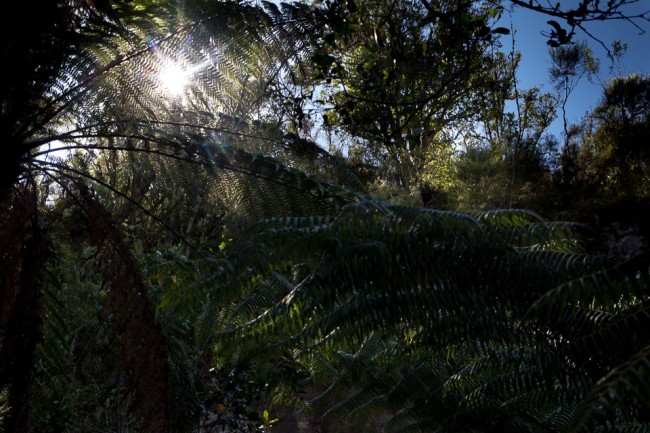 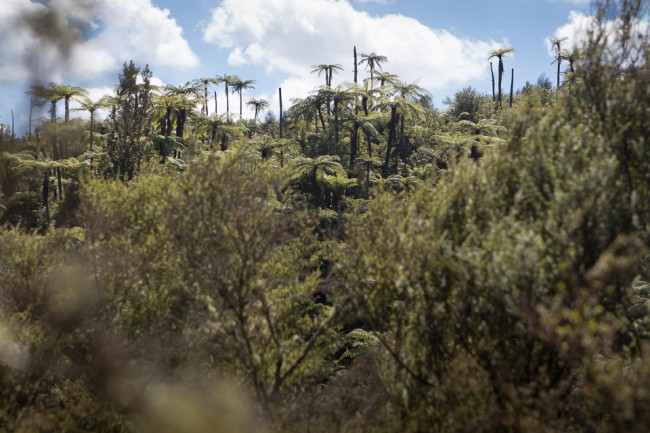 This place was occupied by Māori people from the earliest times. Māori were attracted not only by the beauty of the place but also by the warmth that the hot springs had to offer. The cave was a place of importance to the Māori women (men were not allowed to enter). Te website of Orakei Korako says: “The women used it for ceremonies such as the birth of a child or to celebrate an upcoming marriage. They would sing ‘waiata’ (songs) during these ceremonies, which could be heard clearly by folk on the other side of the river, due to the shape of the cave. A tapu-raising ceremony was held in the early 1900s to allow men to enter the cave, thus opening the park and cave to the public”. 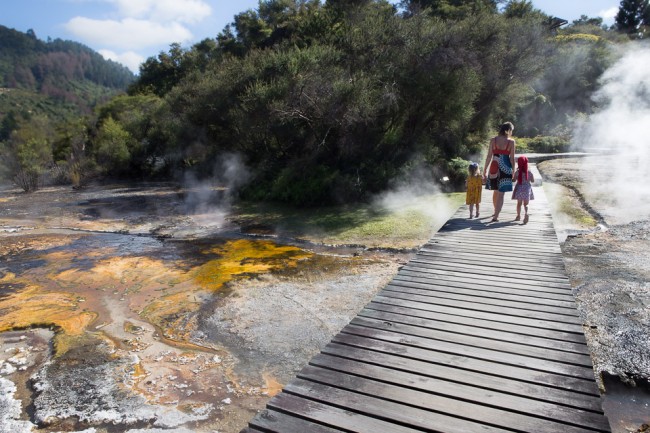 Early European travellers arrived to Orakei Korako in early 1900s. The area was established very fast as a visitor attraction. Officially already in 1937 it was opened as a tourist resort. The road was improved and people started to come. Craig Gibson, the current owner of the place, started to come to the region with his family at the beginning of 1990s, just for holidays and water sports. He liked the place and together with his wife decided to change their lives a bit and make the place better, more modern and accessible for the tourists. Around year 2000 they re-opened the tourist site, and now there is not only bubbling mud but also hot good coffee and cakes in the café. 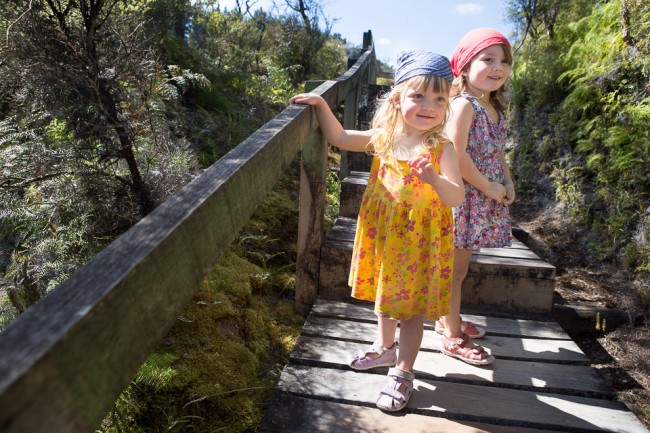 Thanks you,  Craig, for letting us there for free! Craig is a cooperating with NewZealand.com.