Not an easy beginning in Canun, Mexico (Hurrican, Family) | The Family Without Borders
Mexico
October 29, 2011
Likes 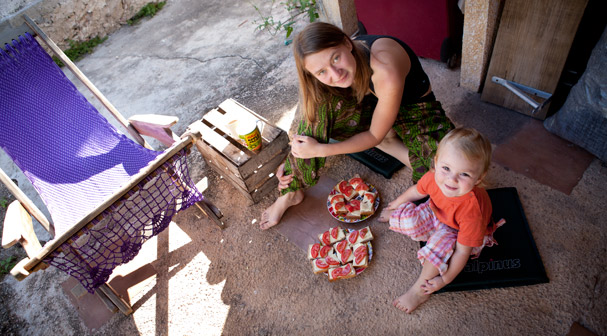 The first few days were reserved for buying the car. We knew it won’t be so easy to just get to another country, on another continent and immediately find a car, good one, proper for the 6-months-family trip, owned by a person who doesn’t want to cheat on you, give him the money and happily drive away.

But we didn’t expect few bigger problems, we had to face. Yeah yeah, the Family Without Borders met some borders.

The borders of parents

First of all was a sickness of our smallest girl, Mila. Crazy fever and cold. Additionally the first doctor we met (at some night duty in the hospital) said that it was “dengue” (which is a serious tropical disease). Which was not but you can only imagine our level of worry!

The borders of nature

Second thing was a hurricane Rina crossing the Caribbean Sea (btw, have you ever noticed that only female named hurricanes are the strong, known ones?). Rina was coming from the east closer and closer to the coast of Honduras, Belize and Mexico, including Cancun, reaching in some point a status of “hurricane 2nd category” (there are 5 categories, with the 2nd one roofs and trees can fly around).

Cancun got a bit crazy in those days, many places (including some offices we had to visit because of the car) were closed, people were doing emergency shopping (water, candles and food for a week), streets were smelling with incenses (some old Maya way of dealing with problems), windows of many houses got covered by wooden boards, you couldn’t buy any alcohol in the shops and people were constantly refreshing page of National Hurrican Centre.

Maybe nothing to be surprised about, with those hurricanes you never know what and how will happen and the Wilma (from 2005) made a real mess in here (damage is estimated at $29.1 billion!). Anyways, Rina was nice to us. In last hours she changed into category 1 and at the end into a “tropical storm”. It was still the strongest storm I have ever seen (or rather heard) but was ok.

The borders of system

Once we found a proper car – we had to get the money to pay for it. And since the seller wanted cash (maybe no bank account, or maybe would have taken too long?) – we had to get the cash. And even with having three different bank cards and a credit card and visiting five different banks, getting this amount of cash is a challenge. Bank have limits in giving money to one person on one day, cash machines have limit to withdraw too much money at once. When we thought we found a nice gap in the system (when you withdraw maximum amount he allows you to withdraw and the machine is asking if you are ready, say “no” and do the transaction again), German bank has blocked our bank account (because it was suspicious for them that somebody in Mexico is withdrawing again and again money from our card). All in all, it all took too much time.

Our time and time of our dear host: Maria from Couch Surfing portal. Before the trip we decided to make this step and register on two portals: couchsurfing and 9flats, to have this opportunity of staying somewhere with this feeling of safety.

During those long-short 10 days we promised ourselves that even with all those problems – first we do is getting the car and only then thinking about discovering beaches, getting to know new people and all those nice things everybody has in mind while thinking about the new trip of The Family Without Borders.

That’s why there are almost no photos and feel able stress and hope that in next days we tell you more!

– We feel like in sauna, even if it’s colder time now here (humidity)

– once you have a car – Cancun changes into tiny village

– they have here only one kind of flour, so bread is super boring

– it’s very difficult to buy travel guides in Cancun (we have visited already six places and only in Gandhi bookshop there were some, like Berlin, Barcelona and Paris (hehh)

– every house here has a hack to put on the hammock (we have to get one!)

– during those 10 days of being eaten up by mosquitoes any time of the day, I didn’t notice even one sitting on me! Are they so small of so f* fast?!