Iran Trip with Kids and Family – a good Idea? | The Family Without Borders
Iran
February 23, 2016
Likes

TOM // We both didn’t know too much about Iran before the trip. I know some stuff about politics, history. You knew some stories from friends, but we were not really prepared, hmm?

ANNA //  Yes and no. For the last five years, I’ve heard from so many friends how hospitable Iran is. “This is a country for your family!”, people used to say. And, since we have visited in those last years, really very far away and very “different” countries, taking a decision about going to Iran was not a challenge anymore. It was on our list-to-go and few weeks before, when I saw those cheap flights Berlin-Tehran (300 euros for 4 of us there and back!), exactly on the dates, when Hanna had a few days free of school (nope, it’s not easy anymore this travelling!), I just had to bought them. And I knew that, in this crazy time with all the refugees campaigns and last work on the book, there will be no time for preparations. But it’s still better to go not prepared than not to go, right?

TOM // So we had our first little surprise arriving in the middle of the night. We didn’t apply for visas in advance, because you sweetest, were fighting for your new passport until the last days (Anna had to change the passport, because in the old one she had a stamp from Israel, which is a real no-go at the Iranian border).
First, at the airport: – “Do you have a health insurance for Iran, Sir? – “Yes, you can read on this paper: insurance valid wordwide” – “But it’s not mentioned that it’s for Iran too.” – “But it’s for all the countries in the world.– “No, sorry, we can not let you in…”
And at the end, of course, they did, but we needed to play the power games first. Waiting for three, fours hours for our documents, not being sure if it will work out… You remember what did Mila say? She asked you – Mila likes to check your level of German – “Mummy, do you know what unendlich (German for infinite) mean? Waiting in the line for the visas is unendlich!”:)
So… will we visit the Iranian embassy in Berlin next time to get our visa before we enter Iran?

ANNA // Well. You know how we are with those things. Somehow I can’t believe that we fly to such an amazing country with two kids, and in the middle of the night at the airport they really wouldn’t let us it. Think positive ;)
But maybe we should tell our readers that they really, really need to have some address/contact with phone number for the getting the visa at the airport (so called “visa on arrival“) and 60 euros in cash. The safe and easy option is to contact those guys: Iran Paradise and have no stress, with visa, transport from the airport in the middle of the night and stuff like this. We met with them, we know them, we recommend them;)

TOM // Think positive… In Iran, all the time, you needed to have the scarf on your head. How did that feel like?

ANNA // Uhhh. That was not easy. I love to feel comfortable and generally I prefer to have rather less clothes than more on me. But before the trip I thought: well, what’s the problem, it’s such a short time. But I have to say, that it was really annoying. And if girls, being forced to take off their scarfs feel as bad as me being forced to wear it – I’m officially really sorry for the people forcing them.

TOM // Is it a reason not to travel to Iran?

ANNA // No, come on. Respecting the rules and the habits of the place, make the travelling deeper, I think.

HANNA (our bigger daughter, 6 y.) // And next time I will also wear the scarf! 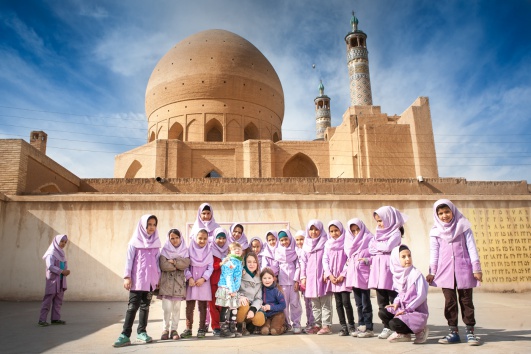 A girls school in Kashan (Iran) with mosque in the background 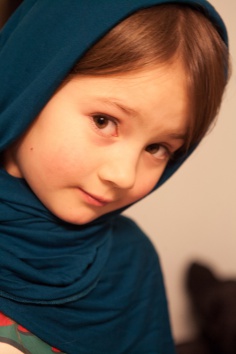 Hanna – do I have to wear a scarf?

ANNA // Yeah, Hanna learned during our spontaneous visit to the primary school that from the early beginning of the school (being around 5-6) girls do wear the scarfs. And then she had a serious dilemma: – “Do I also need to wear the scarf, Mummy? Or I don’t have to? Nobody here knows that I’m also already in school. But is it ok to lie? But it’s so annoying to run and jump in this scarf.” But but but…
Hanna, did you like the visit in the school?

HANNA // No! All the kids wanted to touch me and everybody was taking pictures of me.

ANNA // But that was quite everywhere like this in Iran, no?

HANNA // Yes, but sometimes I was in good mood and it was ok.

MILA (our smaller daughter, 5 y.) // : And sometimes you were running away and then I smiled to the picture:)

ANNA //  Was there anything else annoying you?

HANNA // : Driving in the taxi in Tehran. Those drivers were crazy! Fast and driving everywhere, on all the lanes.

TOM // Oh I am still happy we had taxi drivers. I wouldn’t like to drive a car in the traffic of Tehran. Even driving in Georgia seems much easier. I can understand why rentals are so expensive – guess they have a lot of accidents. Life can be much easier if you have less sometimes. No car, no worries. And taxis and busses were really affordable. 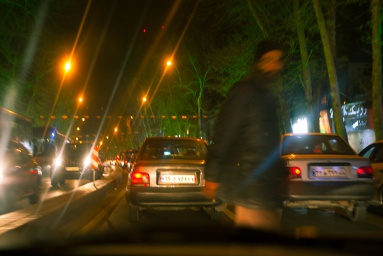 Crossing a street in Tehran (Iran) can be dangerous 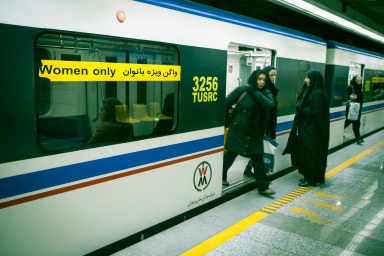 HANNA // And in metro there are wagons for ladies only! But sometimes they pushed us altogether into the ladies one and our papa was the only man!

MILA // And we didn’t have to buy tickets, remember?

ANNA // Yeah, the ticket seller said: “be my guest”, so even for metro we didn’t have to pay. I think in general, travelling in Iran is cheap. Since the petrol is cheap – all the long distance bus rides are cheap, even taxis are ok. Food in the local bars is cheaper than in Berlin or Warsaw and sleeping… well, it’s a challenge not be invited to people’s homes;) And couchsurfing is super big in Iran. Since some other social media are blocked and the people are very hospitable – couchsurfing is THE thing to do.

TOM // Girls, and what did you like the most in Iran?

HANNA // Running on the desert!

ANNA // This moments, when an old man, on his old bike, in a little town, rides down the street, stops just next to us and says: – “Welcome to Iran! You don’t know how happy I am to see you, with your two angles, in my country!” – and rides away…

HANNA // The big mountain almost just in the city!

MILA // And that you can ski there!

TOM // Oh yes, this was amazing: driving to the north part of the city, sitting in the cable car and suddenly you are on 3000 metres and people around you carry a snowboard. Very cool.

ANNA // But we had a plan to go up and have a lovely view on the city. Well… Tehran is sooo polluted that not only breathing during city walks is not fun but from the cable car on one side you see amazing peaks of the mountains, and on the other: a grey, grey hole, where the city should be. 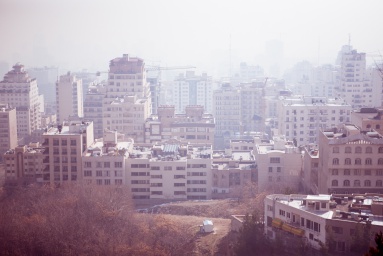 Tehran (Iran) from up: grey and smoky 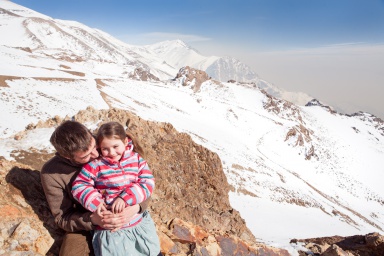 TOM // Do you feel like coming back for the next Iran trip?

ANNA // Yes, but I can’t imagine travelling in summer. Even in the coldest month of the year, in the scarf and with long sleeves, I was sometimes too warm. I guess spring must be nice – not too hot but green trees, flowers, and still not many tourist. Must be beautiful.

TOM // Have you ever felt in danger, felt threatened – as a woman? I felt completely save all the time.

ANNA // In Iran, even if I put a scarf and a coat, I mean – everybody sees my green eyes and blond hair, somehow. So I do look different. And it’s the first country, I felt a total respect and no single “hey hey girl” look from any man. Man could say a compliment, even a very beautiful and metaphoric one, but in a super polite, respectful way.

Anything was annoying you?

TOM // Oh this money thing! The official currency in Iran is: “rial”. But Iranians almost always talk in “tomans”. At the end it’s not difficult – just 1 toman is 10 rials, but at the beginning it’s really annoying. You agree with a taxi driver on some price and he want’s ten times more from you! The sooner you get your head around the idea of tomans, the better!

Another thing were the Mullahs, the pictures of martyrs of Iran-Iraq war, blocked facebook…  For me it was somehow strange how free people are in their minds and how different the state, the rules, the picture of Iran we have in our media – is.

ANNA // That’s why we travel, no? To see, check, feel and talk, with the real people, not with a travel guide or a political magazine.

/ more about places we visited and people we met —> soon!