A warm welcome in Guatemala | The Family Without Borders
Guatemala
January 6, 2012
Likes 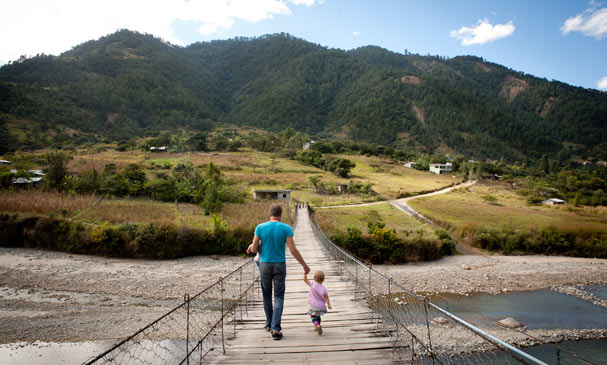 Guatemala is a country a bit bigger than England, where the civil war finished only 15 years ago. Still most of the people keep their guns, so we will have to get used to this view in next few weeks.

We have a lot of respect to this country, where every day people get killed (especially in the capital), where the life of a person doesn’t mean too much, since years. In Mexico we heard only bad stories, we didn’t meet anybody who hadn’t had a story from Guatemala: armed guys taking away your laptop in the popular hostel and stuff like this. Our friends living in Guatemala were wondering: why the hell we want to come?

But except all those stories, all those guns in big cities, there are still indigenous Mayas, there is amazing nature, volcanoes and hundreds of good people.

And those we met on the first evening. After happy crossing of the boarder with Mexico – we turned into the mountains and when it started to get dark, we stopped to ask for an advice (which always includes some kind of permission) where to stay here around. We got invited to stay at the “courtyard” (which very often ends up like this) and spend the evening between Maya women peeling the corn. Hanna was really sweet: she immediately sat between them and helped with their work. Very calm, smile-no-words evening (it was Mam Maya village, they didn’t speak any Spanish).

In the morning we took a fast bath in the nearby mountain river and were ready to hit the road. Very fast we had to change the plan because drivers of those (so called) chicken-buses (very colourful, old US school buses) decided to announce the strike and for few hours all the valley was totally blocked.

First impressions of Guatemala?
– It’s getting poor… On every road there are people collecting and carrying wood to have some fire. According to UN report top 20% of the population has 30 times bigger income than the bottom 20%
– There are volcanoes!!
– Drivers of chicken-buses are absolutely crazy: good to drive after one – he knows the curves and holes in the roads. But just few minutes before us there was a bus with 9 people falling down to the steep valley, not the first one this month on this part of the Panamericana Highway.