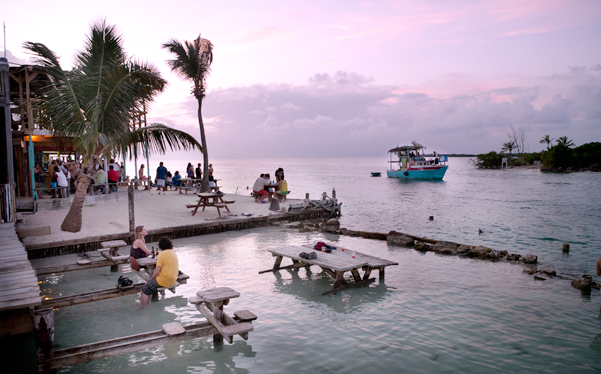 Some when hearing Belize – think nothing. And all the others – connect this country with the Belize Barrier Reef, 300 kilometres long section of the 900 kilometres long Mesoamerican Barrier Reef System, which is continuous from Cancún on the northeast tip of the Yucatán Peninsula through the Riviera Maya up to Honduras making it one of the largest coral reef systems in the world, just after the Great Barrier Reef in Australia.

The Belizian part of the reef includes 450 islets and islands known locally as cayes (read like “keys”). Small, low-elevation, sandy island formed on the surface of a coral reef. Those which you have in mind when you imagine paradise and stuff like that. On of the most impressive places is the so called Great Blue Hole. From Caye Caulker you can make boat tours to this amazing place and dive there.

A trip to Caye Caulker

Sure thing, we had to visit one. We chosen the one with slogan: “Go slow”. Caye Caulker, just next to the caye about which Madonna was singing “La isla bonita”. 8 kilometres long and even not 2 kilometres wide, 32 kilometres by boat from Belize City. Many connections by boats a day, 40 minutes and you are there.

The caye lives from tourism and fishing (the island sits in the middle of natural migration routes for fish, and feeding grounds for conch and lobster), maybe 1000 people, everybody knows everybody. Funny golf cars as taxis, many small cafes and thousands of diving and snorkeling offers. Caye Caulker is a good start to visit the Blue Hole (a large submarine sinkhole) but since we were with kids there was no way to go into the water together. But we met some very sweet Australian couple and Tom joined them for half-a-day snorkeling trip, including a meeting with shark (he said he touched it but this couple have never send me any pictures, so I don’t know if I should believe or not : P )