Belize: Bartons Creek | The Family Without Borders
Belize
May 25, 2012
Likes 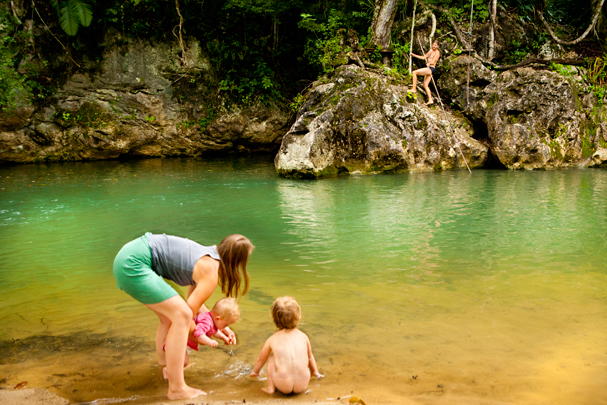 Hot, wet, bumpy road and full car – that was a bit more than hour-long drive. But with a friendly company time was passing by very fast. Until the moment our path was crossed by.. a river. The second part of the road was on the other side of the river, so that was obviously way to go. The glint in Tom’s eyes meant: let’s face the challenge! After checking the depth our dear Dodge Caravan had a small car wash of the underbody. Went fine, and after meeting our first Mennonites, we reached the Barton Creek Outpost, lovely base for many adventures in the jungle.

An American family with couple of kids moved in to this lonely corner some years ago and started the lodging and camping possibilities at the river. There are hammocks, amazing home made food, small library, very homely atmosphere. Right there you can jump into the river like a Tarzan (like Tom), eat oranges from the tree or watch parrots or toucans on the trees.

Just some metres away there is a cave (Barton Creek Cave), which you can visit by kayak and check out 8km of passages. It is known both: as a touristic destination but also as a archaeological site. In cave there were found remains of at least 28 humans and many pottery shards, which makes scientist believe there was a life already at the beginning of 1st century. The strong evidence exist already in the first kilometre of kayaking, where on the left ledge one can see human bones and skulls. In the dark as hell cave, between stalactites and flying bats, it makes a strong impression.

Especially that we made the trip just with a security guy, after the opening hours (during day the entrance costs something like 60 US dollars a person!), in the late evening. We were all sitting in a moving kayak. I was holding Hanna on the front with one hand, and holding a lamp in the other hand. Tom was holding Mila and the camera. The guy was paddling. All the bats were flying into my face and turning just centimetres in front of me, Hanna was holding my hand much stronger then usual. It was all a very exiting experience but was also very good to leave this cave.

Night in Barton Creek is a truly special thing. All those glow warms appearing around our car, all the voices of nature, which sounded like a whisper and rustle, the humid smells. First time in this wet, dark jungle I had a goose pimples.