Thanks to the last 10 months of helping the refugees in Berlin, I’ve got to know dozen of amazing ladies. Yes, in 98% it was ladies. In 90%… Polish. Some time ago (ok, 3 weeks ago, to be precise!) we decided to organise a picnic. Just for ladies (with kids), just in the park, just on the random Sunday afternoon.

There were three aims of the picnic: 1. to get rid of the things I still had in my cellar (all the things, so-called “not the first need”, which was difficult to give to the shelters: summer female clothes, underwear, bags, toys), 2. to give those things to the ladies, who would be happy about it, 3. to MEET.

It’s not easy to access the refugee camp, it’s not easy to get in touch with the ladies (especially if they are married, if they have few kids). Mostly men take part in the activities, German courses, meetings. We decided to reach them, convince to cross Berlin and join us in the park.

We made the list of 13 camps, created the poster, translated it into other languages, printed it, hanged in the shelters, got it touch with people. We found the girls, who would pick up the ladies at the right time from the shelters and guide to the park. We selected the things, packed them and transport closer to the park (8 cars? 9? I don’t remember:).

And on the last Sunday early afternoon, in even bigger team (many Berlin ladies just joined us to help), we were sitting in the park, with tons of clothes on the blankets and we waited… 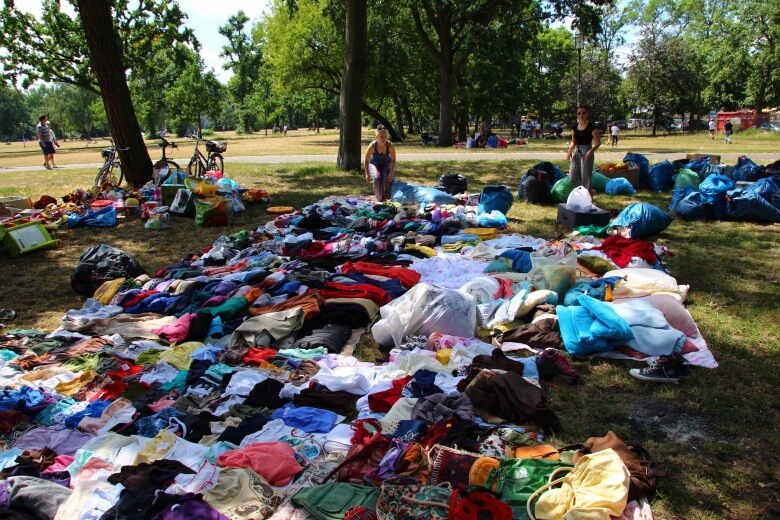 I cried (from happiness) only 3 times. For the first time, when I saw how many things we have for giving away, how nice food people brought to share, how great place in the Berlin park we had. Then, just after 14.00, when we were terribly afraid that nobody will join the picnic and we saw, from far, the line of lovely ladies approaching. One, ten, twenty… Altogether we were more than 200 newcomers ladies and 100 Berliners!!! And so many kids! For the third time I cried, when a little boy came to me, with a little bike, pointed with his finger the bike, then himself and asked: “meine!?!?!” and when I said “of course!” he started to cry.

This Sunday was a little miracle. Such a female energy, without any competition, hurry or anger. Just a lot of motivation and will to do something, which makes sense! A common project: everybody felt as a host, cutting the veggies for salad, carrying heavy bags, driving the cars, singing and playing with the kids. 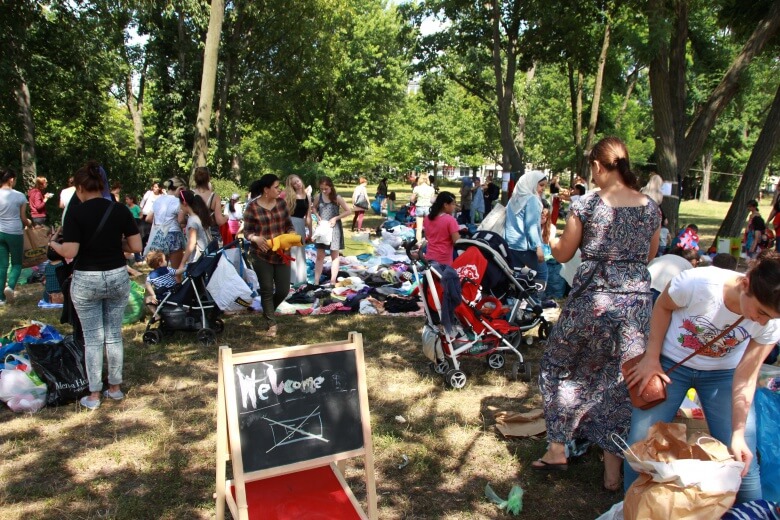 The idea was that everybody was the same: everybody could join (even people crossing the park), eat, take anything.

In the evening, when I physically couldn’t move, I’ve got a message from one friend of mine from the shelter: “Anna, do you know that those women have never been invited for anything? It was the first time since those long months. It’s not even about the bags, their brought home, full of beautiful clothes. It’s not about the toys for their kids. It’s about the time and energy, that you all put it in. They know it and they have seen that somebody does care about them”. 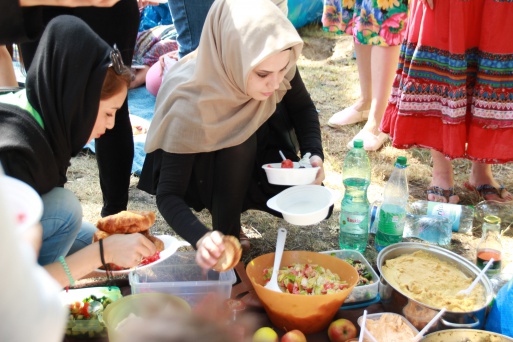 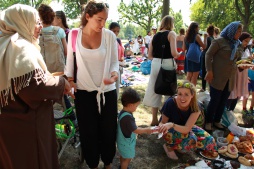 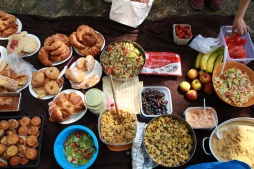 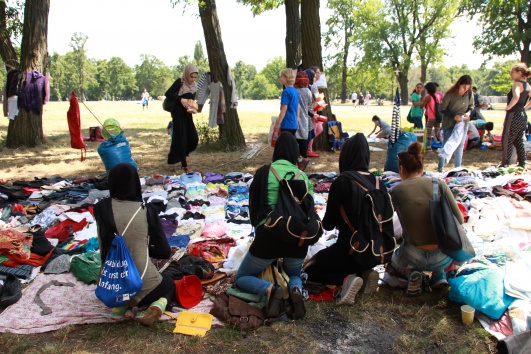 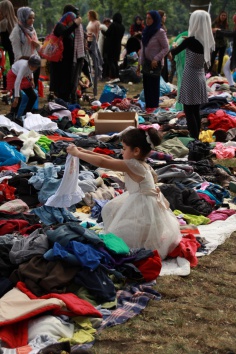 I also had many talks with the women from Berlin: German, Polish, American. Who joined us, brought a lot of food (can you imagine that all day long it was enough food for all those people?!?), helped us to fill the plastic bottles with water from the bathroom in the park (it was a really hot day!). They said: “I live in Berlin, I’m open minded, I would like to help and get in touch, but somehow I don’t know how. I can’t just go to the camp and say: hey, Im Sylvia. Here I can…” 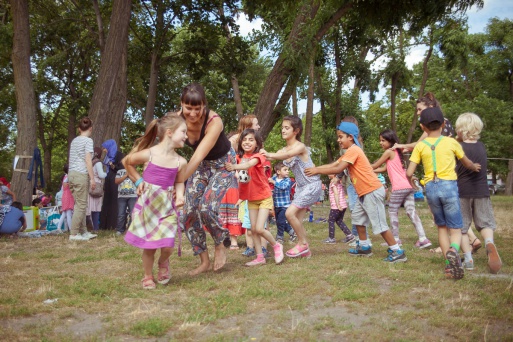 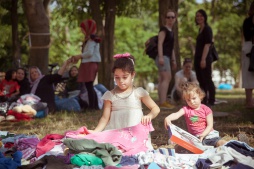 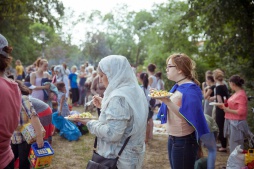 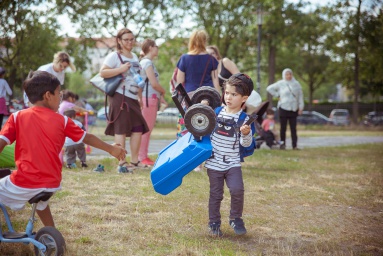 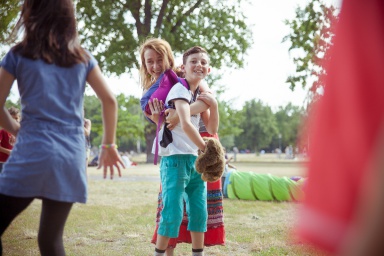 Of course there were also challenges. One lady lost her bag with her temporary ID (and something like this for a refugee is a real problem!), two women had a fight about the bra, one girl lost her shoes (was easy, between those tons of things!). But when I was saying goodbye to one group, leaving the picnic I said: “so see you next time”. And they answered: “Next week maybe?!?!”.

Well. Not next week. But we gonna repeat it in September. We are just working on the dates and for sure will let you know! There can be many things done in a better way: we will still need to collect more stuff, divide them, find more food and drinks, find some musicians, good games for kids, etc etc. But we will! (any suggestions: anna.alboth@gmail.com)

Why? Because it’s worth to create those kind of excuses for meetings. For an exchange. I call it “provoking coincidences”:)

You want one last story? In the middle of the picnic one young Syrian girl came to me. She told me she has all the papers needed, money from the office to rent a room in Berlin but she can’t find one. I promised her to save her number and let her know if I hear about anything. After 10 minutes (!!!) I talked with one woman from Berlin. She told me that in their shared flat they have a free room and after some discussions they decided to rent it to a refugee. But.. that they would prefer some girl, best if young…
:)

I would like to send a huge huge hugs to all the girls, who made this picnic possible! I’m proud I have such people around me! See you in September!