When last year, together with my brother and sister, we have visited Barcelona, Gosia, a reader of our blog, wrote to us: „In the future, be aware that Rome was is not that wheelchairs’ friendly city“. And you know what? She was right ;) 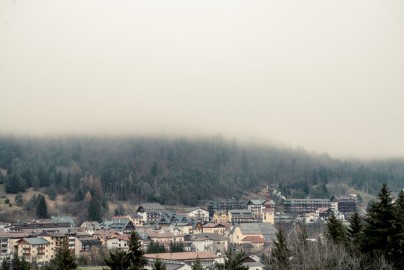 On the long way to Italy by bus. 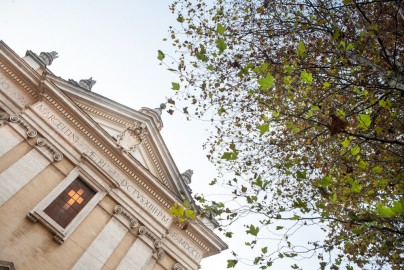 Walking through the streets of Rome. 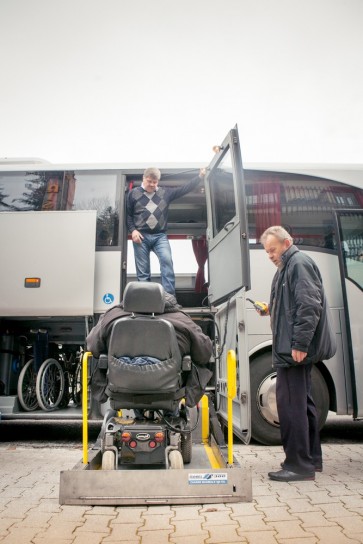 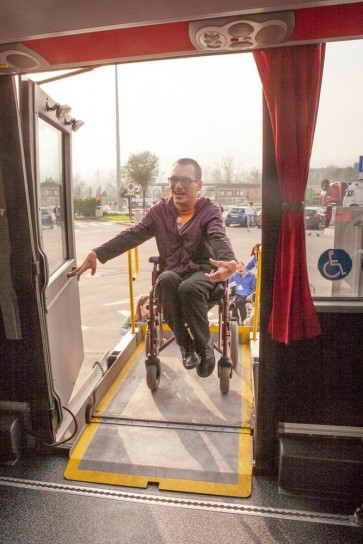 My brother Kuba coming into the special bus. 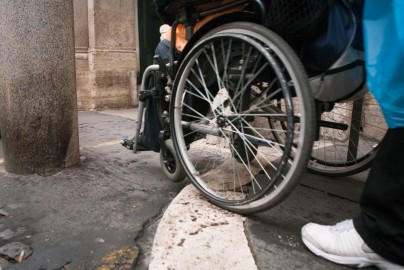 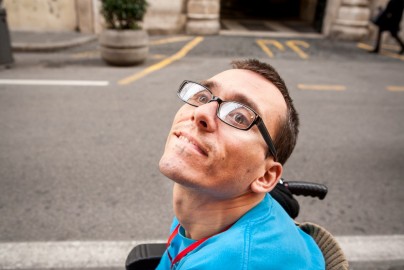 My brother Kuba on the streets of Rome. 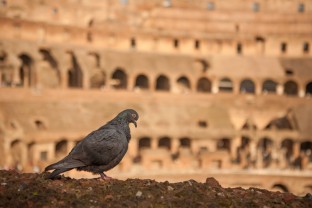 Michal getting ready for the walk. 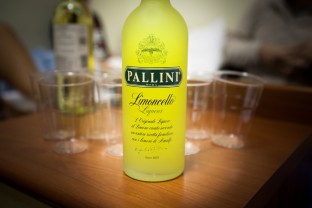 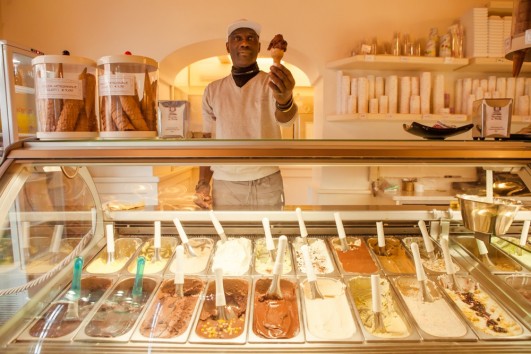 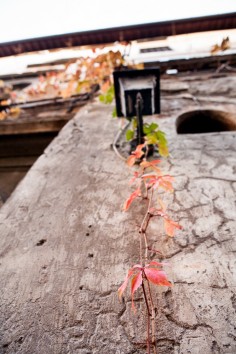 On the streets of Rome. 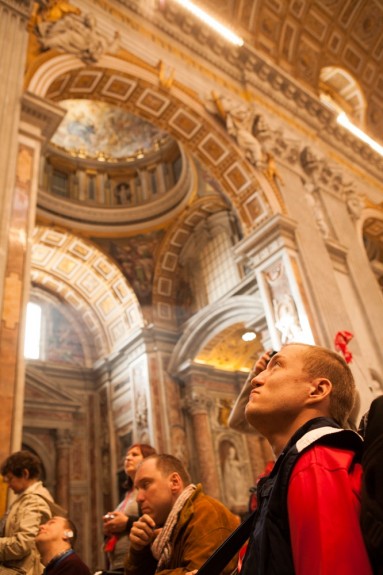 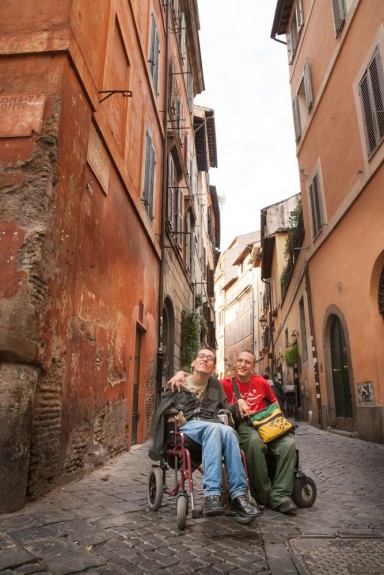 Two good friends on the streets of Rome. 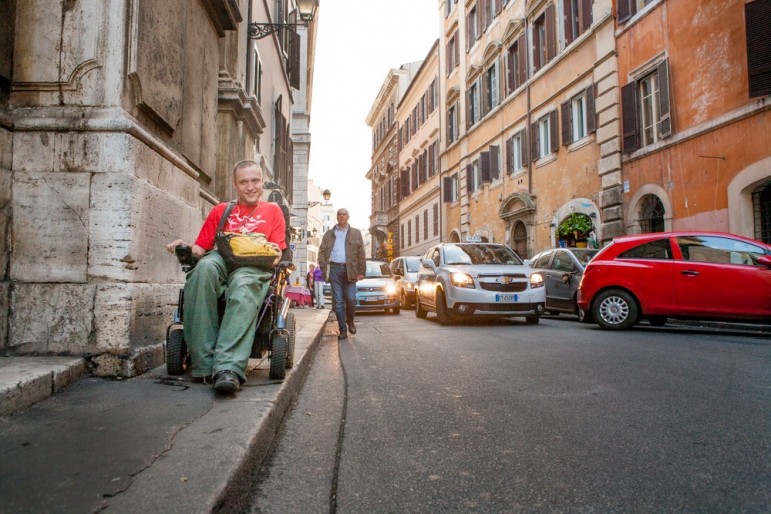 The trip was organised by my brother’s association for adult wheelchair users together with ‘Podroze Bez Granic’ organisation. To make it possible, we went by a special bus, with an elevator for even very big, electric wheelchairs. It took ages but thanks to it, we could travel cheaply and altogether. Other option could have been impossible for many.

So 22 wheelchairs and 22 people helping. Mainly mothers or fathers. And sometimes sisters (like in my case). You know how much time does it take to leave the bus in such a group? If we were fast (practise makes perfect!) it was just half an hour. Back to the bus: the same. So checking out 3 places a day was easily 3 hour less than all of you would have. But nothing to complain about! We were fighting to get as much as possible from those few days.

And so we did! All the classics, as much as possible, sometimes running around for ages to find a corner stone, which was possible to cross with a heavy, electric wheelchair. Sometimes looking for ages for a restaurant, where two wheelchairs can stand next to each other. Sometimes looking for ages for an accessible toilet. Travelling with such a group is a real challenge. And a real happiness. 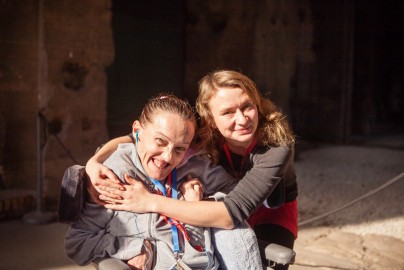 With Kasia in the Colosseum. 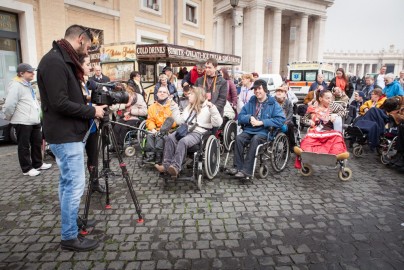 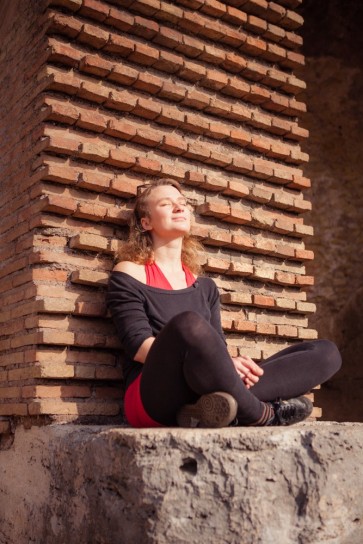 Anna relaxing at the Colosseum. 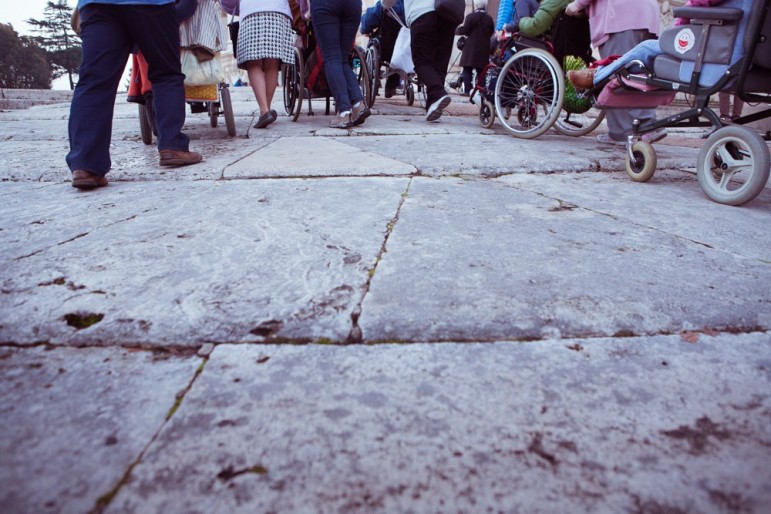 Rome is not the most wheelchairs’ friendly city.

There were few moments, we were never forget.

Like visiting Gosia. I promised to let her know if we might have some free time during the day. When our group went to the Vatican museums, together with my brother we run away (we have been there in the past). I send Gosia a message: „We have 4 hours free, we are now crossing the river, maybe you have some time today?“. After 3 minutes we’ve got an answer: „I think I see you“. And she just appeared on our street! (and we had a nice lunch and talk and some insides about the city and on the next day still visiting her flat!)

Or like the meeting those homeless guys of Vatican. Every day we were getting some lunch boxes but since we were in Italy – we wanted to eat pasta and pizza! So we had bags full of not needed food and decided to do something good with it. Under the main gate of Vatican we were supposed to find some homeless people. We went there, and met… homeless Poles. They were super touched to get some food from my brother and told us stories about the Pope, coming to them at night, and sharing his food with them. On the next day, I made a small interview with the Swiss guards, and they told me that the Pope Francesco is a real „pain in the ass“ for them (that’s how they said it!), because they are responsible for his security and he is „running away at nights to those homeless out there!“…

But the biggest surprise was meeting the Pope himself. We were just some people, between the crowds of people, on the St Peter’s Square on Wednesday (when the Pope is having usually his audiences), was cold and rainy, together with my brother we were hiding under the umbrella waiting for hours for the start, when somebody from the security invited us to the second row. And then the Pope came directly to us, giving his hand to us and giving the blessing to „us and all our important people“. So also to all of you, I would say!! Greetings from Francesco, our dear readers! 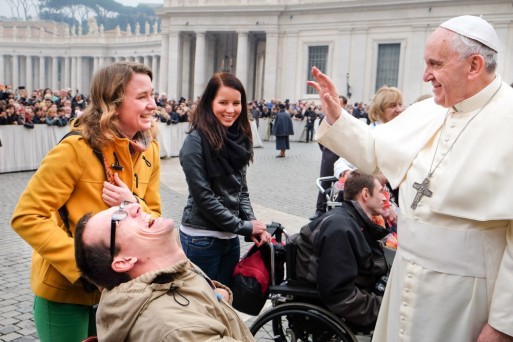 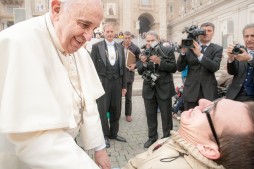 My brother Kuba meeting the Pope. 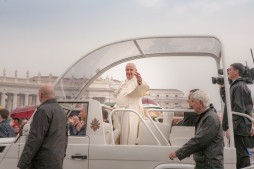 The Pope waving to us.

PS. Not too many pictures this time! Tom was not with us + pushing the wheelchair means having your hands quite busy ;)